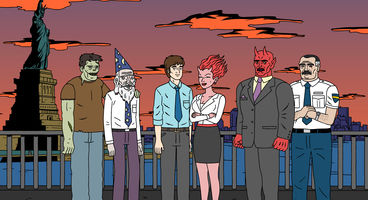 It didn't take long for MTV Networks to return to the videogame world, after dumping Harmonix and withdrawing from the Rock Band series.

The media company has announced plans to launch a new game publisher, 345 Games, which will be releasing two downloadable games, one based on the Comedy Central series The Ugly Americans, and the other on Spike TV's Deadliest Warrior TV series.

Deadliest Warrior: Legends will be released in July on Xbox Live Arcade and PlayStation Network, and will feature new warriors from history, new weapons, "a more precise projectile system" and a new campaign mode. It will be priced at 800 MSP / $9.99 USD.

Ugly Americans: Apocalypsegeddon will be released in August. The animated series is set in an alternate world where humans co-mingle with all sorts of monsters. The game will be a 4 player co-op shooter, with players trying to prevent the apocalypse by fighting creatures and solving case files. The game will include the TV show’s cast as well as a script from the show’s writers. It, too, will be 800 MSP / $9.99.