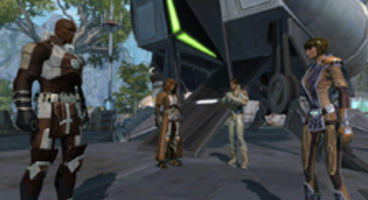 BioWare is launching a major new build of Star Wars: The Old Republic which has delayed European testers' entry into the beta phase until it's live.

Issues with their key system already hampered the EU beta but BioWare will wait to send invites out now until the new 27GB sized client is ready.

We've already missed one week of testing and we continue to do so in Europe until the studio is ready. The new client also means beta characters will be wiped and BioWare didn't want EU testers downloading a huge file only to be subjected to another so soon.

"For those of you that may have missed the messages we put out on the subject already, last week saw a number of issues arise with key systems that prevented us from sending out invites to EU players," said European community manager Chris Collins.

"Had everything gone to plan, we would have been able to offer two weeks of testing time to new users. However, given the issues that arose, this was physically not possible."

"So while we understand that this news may not be what a lot of you wanted to hear today, we hope that you’ll understand our position."

"Given the news of this new build, it’s now more important than ever that we invite European players into the Game Testing environments, so you have my word that this batch of invites will happen, it may just mean you just have to wait a little longer."

The new client is around 27GB and will include German and French localisations when it's ready to go live in Europe. Beta testing was set internationally for September 2nd.