Obsidian: The faults in Fallout: New Vegas due to 'foreign tech' 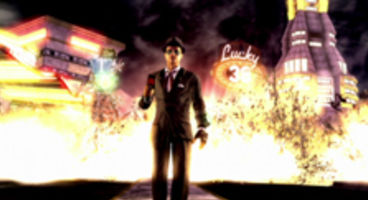 As it wasn't an internally made, like Dungeon Siege III's Onyx engine, the Obsidian team found it difficult to really know what the technology could manage.

"Stability and being bug free are extremely high priorities on this project, and we actually talk about it internally constantly," said Dungeon Siege III project director Rich Taylor.

"The advantage here we have over, for example Fallout, is when we have a question about how something works, I walk 10 feet outside my office door and go talk to the programmer who wrote it. That's a lot different than trying to get someone on a mailing list, or get someone on the phone who's in a different time zone or across the country."

"Those sort of things have made it possible for us to stabilise things and keep things working as well as we like," he said. Many fans were upset when they learnt Obsidian would be using the Gamebyro engine in Fallout: New Vegas; it's notoriously buggy.

"Here we have the advantage of, no matter who runs into a crash issue, we're able to get it up on the screen with a stack dump and look at it and peel back the information on it, and identify exactly what happened and get it fixed. That's been a change."

"When we've worked with other engines sometimes you get a crash and you're like, well, I don't know. We didn't write this. Why is this happening? You get a bunch of engineers in there trying to reproduce something that takes hours to reproduce," he added.

"Those kind of things can be difficult when you're not able to develop your own tech. But our crash and stability tools on this project have been phenomenal."

Obsidian is currently developing Dungeon Siege III on behalf of Square Enix. The project is considered more of a reboot than an actual sequel in the series.

"So having our own technology, having the actual engineers who wrote it right here, available and working on it, and they're very passionate about making it as stable and solid as possible, certainly worked well for this project," continued Taylor.

"We're gamers, too. I certainly go home and like to play other games that are out there. And when you run into a crash and it disrupts your experience, that's not fun for anyone. We understand that."

"That's why, as the project director on this game, I'm very militant about us addressing the crashes and memory issues." Let's hope so for all those Dungeon Siege fans.

Dungeon Siege III releases on Xbox 360, PS3 and PC May 24th. Has you experience with Fallout: New Vegas been riddled with technical glitches and crashes? Much to the delight of the community Bethesda are using an all-new engine for Elder Scrolls V: Skyrim.