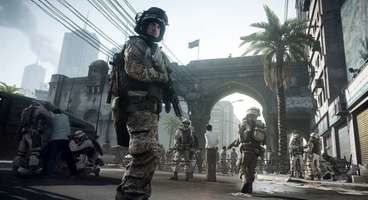 It seems people aren't too put off by Origin, as Electronic Arts CFO Eric Brown revealed at the Citi 2011 Tech Conference yesterday that preorders of Battlefield 3 are sky high, with over 1.25 million preorders already for the game.

"The game has come off of a very successful Gamescom. As of two weeks ago it won game of the show. To date we have about 1.25 million preorders on Battlefield 3, so it's still well ahead of its predecessor title, Battlefield: Bad Company 2, in regards to preorders in the same number of weeks till launch. So it's doing very well." said Brown.

For a comparison, Battlefield: Bad Company 2 sold 5 million units as of May this year, across PC, Xbox 360 and PlayStation 3.

Brown will be making sure that BF3 doesn't get the short shrift on advertising either. The marketing budget for the game is larger than even that of Star Wars: The Old Republic, Bioware's ambitious Star Wars MMO.

"We have a pretty extensive campaign planned for Battlefield 3," revealed Brown."We have the advantage of a two-and-a-half week early launch window versus our competitor (Activision's Call of Duty: Modern Warfare 3), and we intend to use that."

Battlefield 3 will be released on October 25th for PC, Xbox 360 and PlayStation 3.