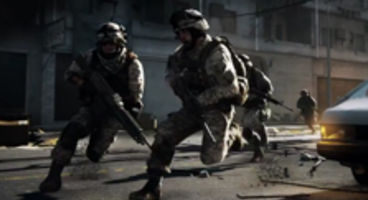 Battlefield 3's Patrick Liu says it "feels good" to be compared with Call of Duty, as they're both "behemoths, and just the notion" they'll pinch gamers is "awesome."

The "old days" made it clear military shooters were the "dominant form" of videogames. Battlefield 3 is a true successor and it means "a lot of different things".

"They’re both military shooters, but in terms of flavor and style they’re different. But we offer so much more than they do, I think; but that’s me," said Battlefield 3 producer Patrick Liu, referring to Call of Duty which wrestled the FPS crown from EA years ago.

DICE is also driven by figuring out what gamers want in their military shooters today. "I think we wanted to have a lot of variety, and different flavors within the game, so we could appeal to different kinds of gamers, and the co-op was one of those things that we identified as like, 'We probably need this." They don't want the formula to get stale.

"A lot of people want to play together, and they don’t want to compete.' So we offer that because of that." Co-op play is nothing new but it's been getting more and more popular over the years thanks to titles like Left 4 Dead.

"Since then, it's grown and grown as a franchise. Single player has become a core pillar now, and we're adding coop for the first time. We'll see what happens with that; if people like it, if it's fun, it will probably grow into a core pillar, as well," he continued.

Battlefield 3 releases on Xbox 360, PS3 and PC October 25th in the US, 28th in Europe. Are you looking forward to the single player and co-op campaigns as well online?