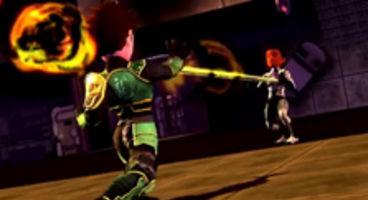 Exclusively coming to Xbox 360's Kinect is PowerUp Heroes from Ubisoft which is a "full-body combat game" which turns our avatars into a "custom superhero".

We fight the forces of evil using our "entire body" to fire "projectiles, dodge strikes" and counter attack. It has 2-player "cosmic showdown" fights online.

"Players can unleash attacks on their opponents in a two-player cosmic showdown online. Additional modes include local two-player versus and four-player tournament."

"Players use their unique Xbox 360 avatars to create custom playable superheroes in the game and prepare their avatar for battle by infusing their super suit with deadly powers and special abilities. After the player’s character destroys an enemy in battle, they will strip them of the super suit and wield their power for their next battle."

"There are 20 super suits to collect including the mighty Necromancer suit which allows the player to control a horde of skeletons, and the Mentalist suit that gives the player the ability to break into their enemy’s mind." Who needs that silly DC Universe or Marvel?