13 October 2011 | By Jonah A. Falcon
Gamers who enjoyed watching the trailers and read previews claiming that Catwoman is a playable character in Batman: Arkham City will be in for a surprise: she's only playable with new copies via a pass code. Gamers with a used copy must shell out 800 Microsoft Points ($9.99 USD/£7.99 UK). 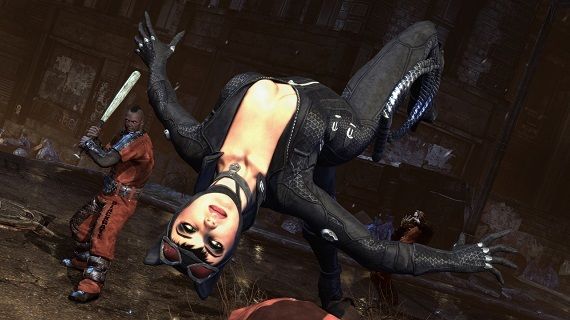 This was revealed when pirates (shame on you) discovered that the 360 version was asking them for a code to unlock Catwoman. According to the title screen, "Catwoman is a unique character with her own story, moves, and weapons. Unlock Catwoman by redeeming the 1st purchaser included in the game case or by visiting Xbox Live Marketplace."

The pass code unlocks Catwoman as a playable character in the single player campaign for four story scenes and for the Riddler's Revenge challenge mode.

Without the code, Catwoman still appears in the game, but her playable missions are skipped. Fortunately, playing as Catwoman is not required to finish the game, although Warner Bros. Interactive hasn't mentioned if there are achievements that require her to be unlocked.