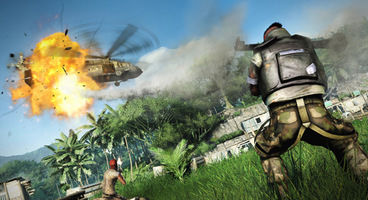 Ubisoft producer Dan Hay is bragging that while Far Cry 3, which debuted at Ubisoft's pre-E3 press briefing, will look "incredible" on PS3 and "fantastic" on Xbox 360, the PC version will be absolutely amazing, as PC users will be able to "dial it to 11," primarily because it's being lead developed on the platform.

"Far Cry is a franchise born on PC, so we want to make sure with the PC experience you can dial it to 11," he said in an interview with CVG. "But at the same time we've got a ton of experience working on Xbox 360 and PS3, and for us making sure that they're on parity with that stuff is incredibly important. So we want to make sure that if you're playing it on PS3 it looks incredible, and if you're playing on the 360 it's unbelievable, sounds amazing and looks fantastic."

Hay added, "We're looking for the experience of anything that contracts from the great characters that we have, the really cool story, the experience that the player's going to have, the immersion... that we hit it with a hammer."

Hopefully, it'll have the same sort of map editor Far Cry 2 featured, too.