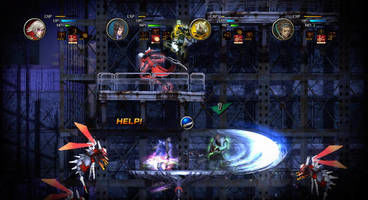 Square-Enix has announced that their four player beat-em'-up action title, Moon Diver, will be hitting Xbox Live Arcade on May 4; the game had already enjoyed a successful release on PlayStation Network.

Developed by feelplus inc., Moon Diver was created by Koichi Yotsui, the visionary game designer behind one of the most iconic arcade action games of the last two decades, Strider. While Moon Diver certainly pays homage to its side-scrolling ancestor with hordes of enemies and gigantic bosses, the game innovates in a number of ways, including entirely modern three-dimensional graphics; a dynamic and intuitive character experience and levelling system; four-player local and online co-op with the ability to instantly drop in and out.