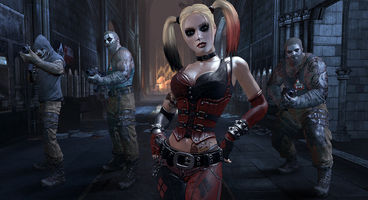 In Batman: Arkham Asylum, Rocksteady included a secret room as an Easter Egg which contained the plans for Arkham City. Of course, Rocksteady had to reveal the room to fans, since no one thought of blowing up a wall three times just to gain access.

This time, Rocksteady has placed several clues about what the game following Arkham City might be about, and it seems to revolve around Harley Quinn having The Joker's baby.

According to VGB, the hints include finding Harley's positive pregnancy test in the Joker's funhouse, Harley Quinn singing a lullaby after the end credits, and dialog between the Joker's henchmen about Harley's sexual relations with the Joker. Finally, one radio frequency features Batman declaring "I will return!"

Since Mark Hamill announced his retirement as the Joker's voice, it could be that Rocksteady is setting up Harley as the next game's antagonist. However, perhaps Harley's baby will be the villain - which would put the next game during the timeline of Batman Beyond. Who wouldn't enjoy being Terry McGinnis with an old Bruce Wayne as his mentor?

Check out the video below for the aforementioned hints.