22 July 2011 | By Jonah A. Falcon
Microsoft and LucasArts announced at San Diego Comic Con 2011 a brand new Xbox 360/Kinect bundle that will not only include a free copy of Kinect Star Wars along with the standard Kinect Adventures title, but will feature an Xbox 360 R2-D2 color scheme, an Xbox 360 wireless controller with a C3-PO color scheme, and a white Kinect sensor. If that weren't enough, the modded 360 has customized sound effects; it whirs and beeps like R2-D2. Even more important to serious Xbox 360 owners, the bundle will include a 320GB hard drive. 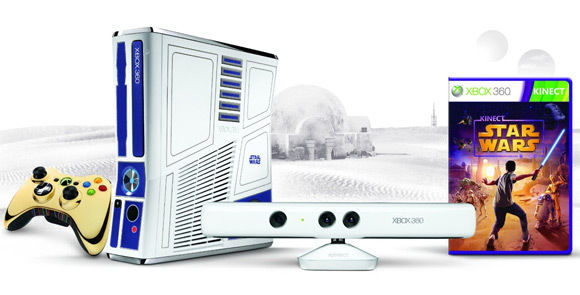 This is the first customized Xbox 360/Kinect bundle, with the rare white Kinect sensor - one wonders if Microsoft will release a white Kinect on its own in the future, or other color schemes like red or blue.

The bundle will cost $449.00, and is now available for pre-order from Amazon.com. The bundle is not due to be released until this coming Holiday season.