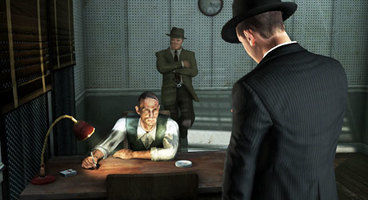 Team Bondi's Brendan McNamara is promising that it won't take five years for L.A. Noire 2 to be released, as it did for the first game.

“Obviously the Motion Scan technology for capturing actors works and exists and other video game people are using that today, so that’s there and available and quick,” said McNamara. “We developed a lot of tools to make this kind of game, so I think that part of it will be shorter. The writing part you can’t really make any shorter. You can make it shorter than five years, but we’ve also now started working on technology for fully body capture.”

With the body capture technology used for L.A. Noire, Team Bondi can put actors in costumes to walk around and give their performances just as they would in film or television. “We’ll be able to drop that performance in a video game, which will be pretty amazing,” promises McNamara.

“All the lies and misdirection means that we have to map out many routes and a very large script to cover all of the different directions a player can go in the game,” added McNamara. “That means the script by its nature is three times as long because you have these different avenues and there are a lot of logical problems to that, as well.”

L.A. Noire is projected by some analysts to sell 4M copies.