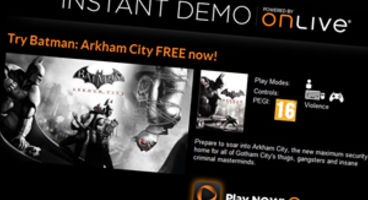 The demo for Batman: Arkham City via OnLive's cloud gaming service has broken records in both the US and UK, boasts CEO Steve Perlman, although he provided no hard figures.

He said gamers recognise the "immense advantages of playing free trials" through OnLive, and makes the try-before-you-buy experience "effortless," and it's becoming the "go-to destination".

OnLive streams games to its Micro Console and to PC or Mac, and the Batman: Arkham City demo lets gamers play the first half hour free. The PC version releases this week.