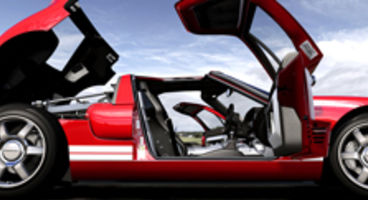 Microsoft's Forza Motorsport 4 will garage around 500 cars from 80 manufacturers with each car "like its own mini-level" before taking it out on the track.

Kinect can navigate the showroom and we're taught about the cars and their makers, of which Top Gear presenter Jeremy Clarkson provided his voice.

These game details came to light from a marketing survey for the upcoming racer from Turn 10. Forza 4 will support head tracking with Kinect to move the camera, and a casual mode lets you steer through races with just your hands.

"By using Kinect for Xbox 360, racing fans can now use head tracking to peer into a corner or their voice to control the game menus and interface," read one of the survey statements. Respondents we're asked what their response was to these blurbs.

"For more casual players you can enjoy sitting or standing controller free and racing alongside your friends, simply by holding your hands at 10 and 2."

A virtual showroom would let you navigate around with Kinect also and BBC presenter Jeremy Clarkson would be providing his voice for the showroom narration. "Each car will be like its own mini level and after your tour, you can take it out on the track."

Also in the survey was talk of an 'open-world' Forza Motorsport where you could drive anywhere and at anytime and not be confined to closed tracks. Forza Motorsport 4 releases exclusively on Xbox 360 this autumn.