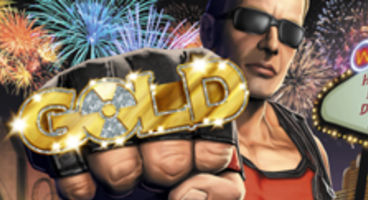 2K Games and Gearbox Software has accomplished what 3D Realms couldn't as Duke Nukem Forever has gone gold, as revealed by a teasing artwork.

Copies are being pressed to disc ready for shipping. Currently DNF is scheduled for a June 10th release, unless aliens really show up and invade - oh the irony.

What's that? I'm lying? I'm toying with your fragile gamer emotions? No, not me. Below is the gold blinged proof that Duke Nukem Forever is gold, releasing on Xbox 360, PS3 and PC June 10th. Unless, you know, that alien invasion actually happens or whatever.

"Duke Nukem Forever is the game that was once thought to be unshippable, and yet here we are, on the precipice of history,” said Christoph Hartmann, president of 2K. “Today marks an amazing day in the annals of gaming lore, the day where the legend of Duke Nukem Forever is finally complete and it takes that final step towards becoming a reality.”

Duke Nukem Forever has been in development for 15 years, starting at 3D Realms and finishing up at Gearbox Software, creator of Borderlands.

"Always bet on Duke, I did," said Randy Pitchford, president of Gearbox Software. "I bet on all of the developers who have ever been a part of this legendary project and I bet that none of us want to live in a world without the Duke." 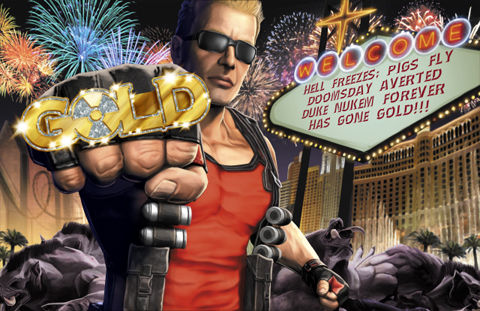