Sundberg: A "fair approach" to give hackers jobs, 'DRM no good' 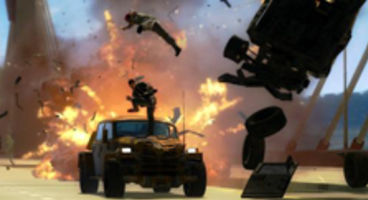 Just Cause 2 developer Avalanche is no fan of DRM, mainly as studio boss Christofer Sundberg is no fan. They let the publishers "fight that battle."

50% of Avalanche staff have "hacker background" he said. It's a "fair approach" to offer them legal work as there's "definitely a lot of talent" to pool.

"Piracy is always worrying," admitted Christofer Sundberg. "It's never been a helpful thing. We'll let our publishers fight that battle. But I mean, 50 percent of the people that work for me come from a hacker background - that's true."

If you can't beat 'em, employ 'em! "Oh yeah. I absolutely think that's a fair approach, to think about how these people can fit on the right side of the law. It's one way, at least. Perhaps the truest pirates are too much down the road of anarchy to ever work with you in a proper way; these are the guys who see us as evil!" joked the studio boss.

"But in Sweden the scene was huge. We're the home of the Pirate Bay, you know. As a studio, we've found that there's definitely a lot of talent." Once more the Avalanche man derides the use of DRM as it utterly fails to curb piracy in the end.

"The DRM does not stop piracy," he said, "it just punishes the people who have actually paid for the game. It's completely useless. Forcing people to be online all the time and so on doesn't show respect to the people who actually buy PC games."

Striving for greater quality in exclusive PC games and providing regular updates can cut piracy however. Just Cause has been very popular on desktops.

"I've always been of the opinion that we should design PC games for the PC players. PC players and console players are completely two different types of consumer. It's always unfair to not design the game for the consumer you're targeting. The PC version is always a second thought, like: 'Oh, and we need a PC version too.'"

"You end up just doing a port, so there's not a lot of time, budget or creative thinking going into using the PC. I think that's quite sad. We should take the PC platform more seriously. Everyone is just complaining about piracy on the PC, but when it comes to in-game DLC or social connectivity, the options on PC compared to console are endless. I would like at some point to do a really good PC game designed specifically for PC players."

"I think piracy wouldn't be as much of an issue if there were better PC games out there. We could just scrap the whole concept of stupid DRM," said Sundberg. Bless you sir!