The excellent Just Cause 2: Multiplayer Mod has received a new update. Version 0.2 is now in public Beta, and you can opt in to play by heading to the Betas tab in your Steam library.

It adds a number of new features and bug fixes, including the ability to script in-game NPCs and play as all the civilian models in the game. The menu's been reworked too, and Steam achievements have been added.

Just Cause 3 isn't all explosions, gunshots and carnage. It is

Avalanche has been demonstrating two of the options to IGN; one sees hero Rico piloting his wingsuit through a series of rings at high speed, while the other gives him a sack full of infinite RPGs, which he can use to blow up a captured base.

No multiplayer for Just Cause 3 at launch, but hope isn't lost just yet

It took a group of hard-working modders to add multiplayer functionality to Just Cause 2 with the hugely popular JC2-MP mod, eventually released by publisher Square Enix as DLC for the open world action game.

Considering the mod's subsequent success, it's strange to hear that Just Cause 3 won't ship with a multiplayer capability at launch. Avalanche CCO Christofer Sundberg explained why to Game Informer recently. 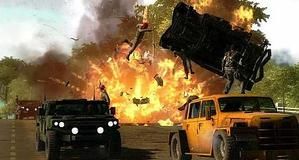