DICE: Battlefield 3 is 'the game people claim they want' 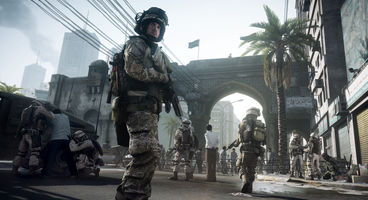 Battlefield 3's executive producer Patrick Bach feels that if you don't like Battlefield 3, don't blame DICE because it's the game every gamer says they want.

In a ten page interview with PSM3, Bach says, "Something I hear a lot from people who haven't actually played Battlefield is that they'd love a modern day, first-person shooter with everything you have in other games, but with vehicles and proper destruction.

"They say, 'that would be awesome!' In other words, this is the game everyone claims they want..."

Bach also says in the interview that Modern Warfare 3 and Battlefield 3 are competing for different markets, that they're not even "competing at the same sport", saying, "We have so many things in our game that aren't a part of Modern Warfare, so it really comes down to personal preference. You choose based on the depth you want, the maturity level, your own personal taste... it's all about how you get your fix."

Battlefield 3 is coming out for PC, Xbox 360 and PlayStation 3 in November.