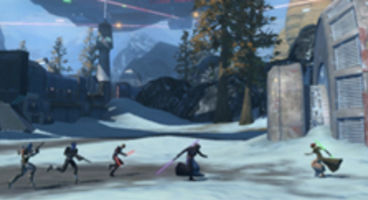 Frank Gibeau of EA Games says that pre-orders for Star Wars: The Old Republic are the "largest number we've done" for an EA title, with Battlefield 3 runner up.

They've got a "really aggressive plan" to meet and scale "multiple millions of users" when the MMO switches on. They can "scale up and light up" servers quickly.

"We've got a really aggressive plan to be able to scale multiple millions of users," assured Frank Gibeau. "We're pretty relaxed about what we're going to be able to achieve there. We'll be able to scale up and light up new severs on a fairly quick basis. We've got a plan to do that over the months following ship, and we've got a lot of capacity built into that."

"It's the largest number we've done at EA comparison to other titles; the next closest title was Battlefield 3, and it was up significantly from there," he said.

EA's "internal judgment" shows the overall MMORPG user base is "in the double digit millions of subscribers in the Western markets," said EA CEO John Riccitiello.

It's between the 12 to 14 million range and even higher "if you start including some of the lower price-per-month competitors," he explained.

"This is a product that starts to make profitability at about a half a million subs," he said. "At about a million subs it's a business that makes good money on an ongoing basis, but it doesn't feel great about the historical investment that sort of got us here."

"And anything north of a million, as we approach a million and a half or two, starts to look like a great investment, and justifies the entire purchase price... of BioWare in a very positive way." Star Wars: The Old Republic is expected to launch around September.

Have you got your pre-order yet, videogamer? EA and BioWare unveiled a pricy but rather fetching Collector's Edition which also promises early access.