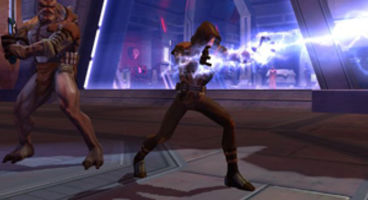 Activision Grand Moff boss Bobby Kotick has downplayed the arrival of Star Wars: The Old Republic for rival EA, saying LucasArts will be the "principal beneficiary" if anyone.

He doesn't understand how EA intend to make a tidy profit, especially as the number of MMOs that achieve such a high level of success are "a small number." Analysts disagree.

A recent survey found that 50 percent of 381 respondents quizzed by Lazard Capital Markets, had 'grown tired' of Blizzard's World of Warcraft, and were curious to The Old Republic.

"Lucas is going to be the principal beneficiary of the success of Star Wars," Kotick said at a Reuters Media Summit. "We've been in business with Lucas for a long time and the economics will always accrue to the benefit of Lucas, so I don't really understand how the economics work for Electronic Arts."

"If you look at the history of the people investing in an MMO and achieving success, it's a small number," he added.

The weekend stress test beta for Star Wars: The Old Republic has now ended. Having played some of the BioWare MMO I was genuinely surprised by how interesting the character class stories can be, with even side quests offering an intriguing glimpse into the Star Wars way of things. Have you tried the beta, video gamer?