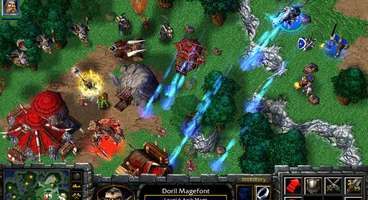 According to David Craddock's upcoming book on the development of the Diablo series, Stay Awhile and Listen, Blizzard at one point considering an always on mechanic for Warcraft III to prevent cheating.

"The decision to store critical game data on internal servers rather than players' hard drives was an idea Blizzard had toyed with during spitball sessions for WarCraft 3," Craddock noted. "The team lead wanted to do something a little different, so he came up with a design entitled Heroes of Warcraft, a RPG/RTS hybrid where players controlled a hero who had special abilities, and a small squad of companions. The game would eschew economics and base-building in favor of pitting squads against each other in tactical combat.

"The Heroes of Warcraft model provided the project's lead developer the opportunity to attempt creating a cheat-proof game: because players would control no more than 10 to 12 units each, Blizzard could store all critical data on its servers. Without direct access to that data, players could not hack the game to give themselves advantages over other players. Ultimately, the team decided that a squad-based game with no resources or base-building strayed too far from the series' beaten path. They decided to return to WarCraft's 'gather resources, build bases, crush enemies' roots, and threw heroes into the mix to change things up a bit."