Warcraft was the game that turned the strategy world upside down. It impacted the game world like Dune II did. This third part of Warcraft was named Warcraft III: The Reign of Chaos

Warcraft was the game that turned the strategy world upside down. It impacted the game world like Dune II did. This third part of Warcraft was named Warcraft III: The Reign of Chaos. 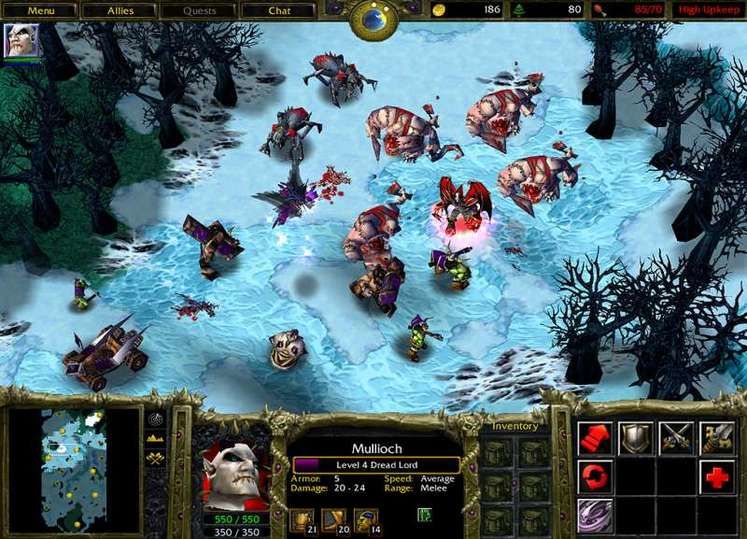 So far there were only two races available for player to control. But now you have 4 races: Humans, Orcs, Undead and the Elves. Each race has its own buildings and diverse units.

While Humans, Orcs and Elves buildings had to be build by peasants, Undead buildings are called by the summoner and they come straight from the hell. Summoner (Acolytes) just needs to call the building and it will start to build up automatically giving the Acolyte time to perform other tasks. Undead also have a different resource collecting model. You call a hunted mine over an existing mine and when its done your Acolytes will automatically teleport gold into your gold reserves from it. Wood collection is done by the Undead warrior called the Ghoul. Ghouls are also used as your first class fighters. They are useful at both fighting and collecting wood. When you summon your main stronghold the territory around it turns into a hell zone allowing you to summon other buildings on that territory. 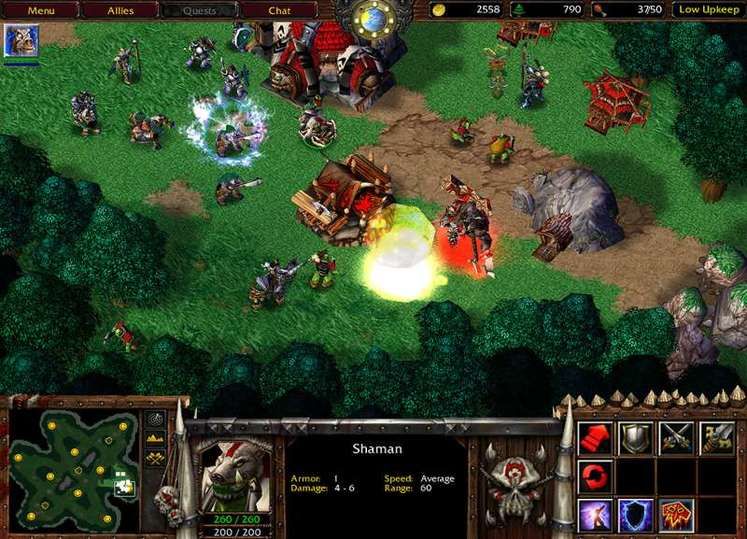 Now you have heroes in the conflict. They will gain experience and levels giving them more and more skills and might at their disposal. They are the main element in the story and the first warrior that runs into fight. At high levels your heroes will gain powerful magical abilities that will further boost your clan firepower.

Campaigns in Reign of Chaos have many sub campaigns and missions. At start you can either play with the Orcish clan or with the Humans. When you finish with the Orcs and Humans, game will let you play the Undead campaign. 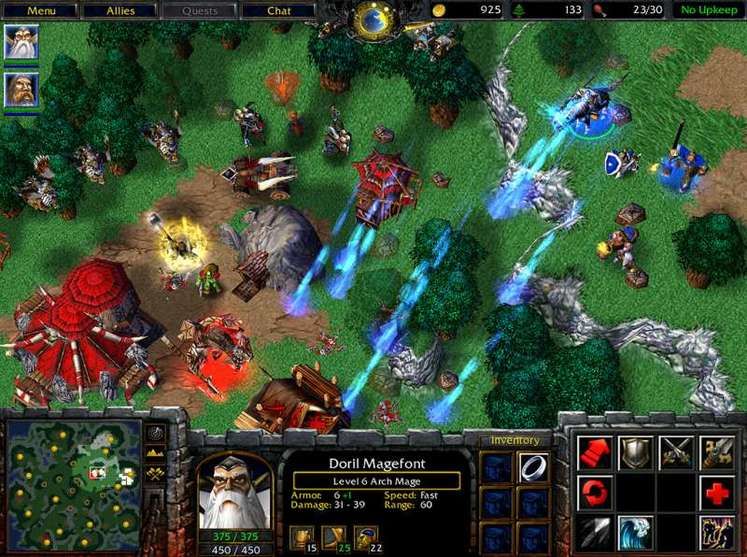 Every unit has its own good and bad points. They are interesting and beautifully animated. Magical abilities from various units hit the right spot and adds a lot to game deepness and gameplay. There are a lot of magic in the game. From combat, heal to simple non aggressive magic that gives your units various bonuses. You can curse the enemy, shield your units, speed them up or slow the enemy down, cast fearsome storms upon your opponent or simple turn them into harmful sheep's. Magic's are flawless and inspiring and almost all of your units has some at their disposal. Good job Blizzard!

Heroes are flawlessly implemented into the gameplay and they fit nicely into the game. Powerful magic and weapons make them a fearsome opponents. 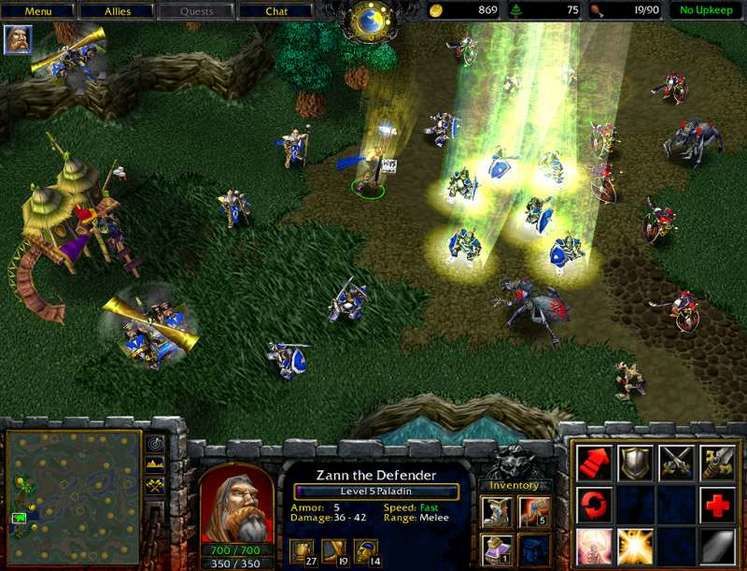 Also there are special skills that your units, creatures can acquire. For instance Human footman can learn the defend ability that gives them the ability to minus the damage done by arrows and other long range weapons. When you give them the defend command they will put the shields in front of them and walk slowly toward the enemy lowering the overall damage done by incoming missiles. Also ads good points to Warcraft III gameplay.

Missions are very interesting and story follows each one. Campaign may look a bit odd but in the end it is well done. Story is interesting and its followed by beautiful cut scenes that will get you into the core of the magical medieval world.

Each of the race creates a unique atmosphere. You will know the race you are playing and you will quickly get in it. Each race has units that separates them from the rest. Best example is the Undead ability to raise the dead of the fallen enemy warriors. That turns the game a bit and is sometimes a necessary element to get to the victory. All race specific elements makes each race highly addictable and playable. Enemy A.I. is well done. They will attack you in formations, try to come to your catapults first and hit your most vulnerable unit on the first clash. Creates a feeling like you are fighting someone. I didn't even once thought I was fighting with the computer which was on many, many games too obvious. Computer will try to find your outside bases and will attack you there. It watches your movement. So besides some minor A.I. problems A.I. is great!

The first thing I would like to point out here is the annoying sound of the Goblin units. Their sound really hurt me from time to time. Well almost each time I heard it. It could've been done better. Sometimes while fighting, A.I. wouldn't include all of its nearby units in the fight and they would just stand there until attacked. As the general A.I. score is great this is a little odd. 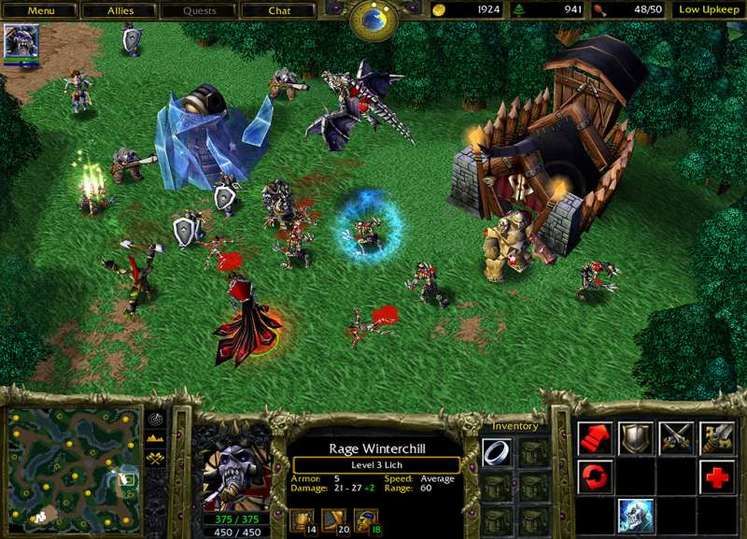 You will quickly realize that you just need to build up your army and get all available unit improvements to charge & eliminate the enemy. There are not many strategies involved in it. You just need to build as many strong units as you can and send them onto the enemy. All you need to watch out for is to have diverse units cause you want defeat them with sending just one type of unit. That gives a little better light over it but there is still a feeling that you just need to build & conquer. If you don't mind that then this could be the best game for your collection. If you do mind then you will get annoyed and bored with it after a week or two of hardcore playing.

Placing your long range units behind wont give them much protection cause some enemy unit will almost always get to it and throw a few punches on it. For the end I would like to point out that the game freezed quite a few times on me. Game isn't even out yet and Blizzard already announced a patch. Shah!