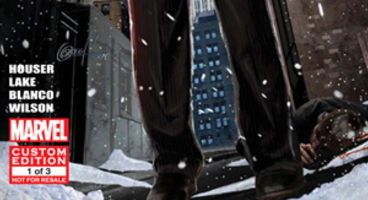 Max Payne creator Remedy praises Rockstar Games for having "a lot of respect for the heritage" of the series, and that they both worked to protect canon with the Marvel comic.

The GTA powerhouse wants to get Max Payne "just right," continued Remedy's Sam Lake, in fact they picked up on things "I would have totally missed." Rockstar after Payne's origins.

If fans were worried about Max Payne getting a shoddy time at Rockstar then think again, says Remedy. The studios teamed up to keep the comic true to the madness.

“The Rockstar guys take the earlier games very seriously and they have a lot of respect for the heritage, they want to get all the details just right, so much so that they have noticed and included things that I’m sure I would have totally missed,” said Sam Lake from Sweden's Remedy.

The comics take place during the timelines of Max Payne 1 & 2, and will feature narrative that predates events in those video games. "The comics take you all the way back to Max's childhood. You'll finally see how far back the tragedy in his life goes and with that a lot of things will click into place," described Lake.

"All the way back to his childhood, and through his career before and after Max 1 and Max 2, in a series of brief flashbacks. That was, originally, why I needed Sam's help!" said Rockstar's Dan Houser.

"For the comic books to do their job, which was to glue this game to the old games, and fill in the blanks for people new to the series, we wanted to go back to the very beginnings of Max. To do that, I needed Sam's help and guidance to properly discuss the character's origins. I had some ideas, and plenty of questions."

"What was very gratifying was how often my ideas and Sam's ideas aligned. It gave me confidence that my understanding of the character and his were very similar."

Sam Lake isn't worried: "The Rockstar guys take the earlier games very seriously and they have a lot of respect for the heritage, they want to get all the details just right, so much so that they have noticed and included things that I'm sure I would have totally missed." Max Payne 3 releases on Xbox 360 and PS3 May 15th and on PC May 29th.