05 April 2012 | By Jonah A. Falcon
Outspark has announced that Dark Blood, the free-to-play PvP fighting game, will be launching in North America and Europe this Summer. The game is a major title in Korea, and Outspark is hoping it will translate well for Western audiences.

“We’re thrilled to be working with developer JCR Soft and licensor GameHi to bring this gripping free-to-play action RPG to the Western markets. Dark Blood is a huge hit in Korea. The game has fast-paced, hack ‘n’ slash mechanics, exciting PvP arenas, an internal ranking system, and mature content.” Outspark CEO Philip Yun stated, “No question it’s a very sexy game with an adrenaline-rush of blood and violence. Players can look forward to many thrilling fight nights.”

Outspark released a teaser trailer for the game. Check it out in the video below. 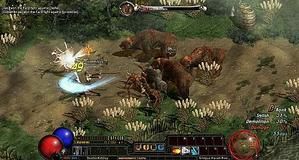