07 January 2012 | By Jonah A. Falcon
The 1.1 patch for Star Wars: The Old Republic is now live for the Public Test Server, according to Bioware. The update includes the new flashpoint Kaon Under Siege, four new level bosses to the Karagga's Palace operation, and some changes to the Open World PvP on Ilum. 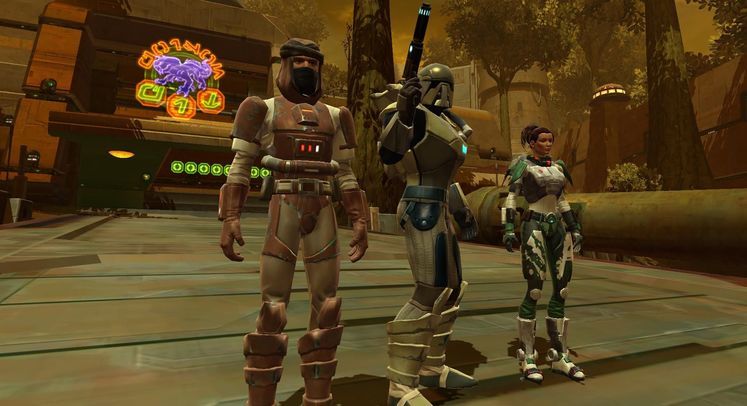 The full patch list can be read in the changelog below - warning, it's a long, long list:

Anti-aliasing is now available and can be enabled in the preferences menu.

This ability now transfers to a new friendly target without requiring deactivation on the previous target.

Activating this ability while targeting a guarded or invalid target will still toggle the Guard ability off.

A new visual effect has been added to the user and the target of the Taunt ability for the duration of its effect.

Project: This ability no longer shakes the screen of onlookers.

Combat Technique: Healing received through Combat Technique has been increased, scales properly at higher levels, and can only be triggered once every 4.5 seconds.

Slow Time: This ability’s damage has been increased by 15% and it now slows the movement speed of all affected targets.

Dark Charge: Healing received through Dark Charge has been increased, scales properly at higher levels, and can only be triggered once every 4.5 seconds.

Wither: Damage has been increased by 15% and it now slows the movement speed of all affected targets.

Intercede: This ability no longer functions on Portable Holo Dancers.

Shatter: this ability’s tooltip now correctly reflects its damage; damage from this ability has not been adjusted.

Corrected an issue where activating cover, using Explosive Probe, and then using Snipe could cause Snipe to be interrupted.

Incendiary Missile: This ability is no longer misclassified as an Area of Effect ability.

C2-N2 and 2V-R8 no longer vocalize crafting commentary during combat.

Fixed an issue that caused players to be unable to progress in Kira’s affection conversations. Players previously affected by this issue can now speak to Kira and progress normally.

Companions will now sell trash items when requested, regardless of group size.

Companion healing abilities no longer apply a permanent green effect on the character.

Fixed an issue that caused Companion Characters to sometimes have the incorrect appearance in cinematics.

Corrected an issue that prevented recently completed Crew Skill missions from showing up in the next list of available missions.

Players can no longer loot harvesting nodes they do not have the appropriate Crew Skill for after a group member harvests (but does not loot) a node.

A new level 50 Flashpoint, Kaon Under Siege, is now available for play in Normal and Hard Modes!

The Gav Daragon and the Ziost Shadow have been expanded to accommodate the Kaon Under Siege gateway.

The difficulty of some non-boss enemies in Flashpoints has been adjusted.

General Ortol’s rocket fire damage no longer occurs when the rocket is not active.

Some enemies in this Flashpoint are no longer invisible.

Corrected an issue that could cause the final boss to become stuck at 10% health.

The Battle of Ilum

Krel Thak’s Allied Weequay Pirates have had their toughness reduced in Hard Mode.

HK-47 now has the correct amount of health in Normal Mode.

Players are now able to successfully loot the chest after defeating the Infernal Council.

Perimeter Defense Cannons have been re-tuned and have improved targeting behaviors.

Soa’s Mind Trap and Force Throw abilities no longer target the same player multiple times; they now target every player in the group once.

Four new bosses can now be battled by players in Karagga’s Palace!

Players no longer get stuck attempting to exit the Karagga’s Palace phase.

Corrected an issue that prevented some enemy NPCs from spawning in Flashpoints.

The correct error message now displays when a player attempts to enter a different Flashpoint than the rest of the group.

Flashpoint gateways no longer display as orange in incorrect circumstances.

Fixed an issue that prevented Flashpoint difficulty from being set properly.

Fixed an issue that caused mapnotes directing players to some Flashpoints to not appear correctly.

Corrected map issues that made locating mission objectives on the Gav Daragon difficult.

Fixed an issue preventing some players from opening a chest after a boss fight if the group was previously defeated by the boss.

An Item Modification Table has been added to the Supplies areas of the Republic and Imperial Fleets.

All Bonus Series missions and their required missions can now be abandoned.

Certain Wampas on Hoth that were preying on lower-level characters have had their level reduced.

Pressure Points: The Lerantha Lurker no longer engages players in combat before completing its spawn sequence.

Geroya be Haran: Objectives related to this mission now glow when selected.

In Cold Blood: Enemies that use Armor Piercing Cell during this mission no longer each stack a debuff on the player.

Shadow Spawn: The Sith Spawn no longer knocks players down for longer than intended.

Thuggish Behavior: Corrected an issue that could cause the player to remain stuck in combat during this mission. The required kills to complete this mission have been reduced.

Climbing the Ladder: A conversation related to this mission no longer ends prematurely.

Droid Clean Up: Corrected an issue that caused the bonus mission to persist in the player’s mission log.

The Summit: The difficulty of the encounter with Sidone has been reduced.

Vivicar Awaits: Lowered the amount of enemies that attack the player during the step “Find a Way Past the Force Field.”

Jilcoln Cadera’s abilities now correctly take into account whether a player is immune from knockbacks.

The “Primal Destroyer” World Boss on Belsavis is now “Overwhelming” as intended.

The World Boss “The First” on Dromund Kaas no longer inhibits Bounty Hunter’s Rapid Shots, and Imperial Agents will no longer be knocked out of cover during combat with it.

The shuttle room in Dorn Base Command Center on Hoth is no longer considered contested territory.

Ka on Voss is now a PvP Sanctuary.

Level 50 players now participate in their own Warzone bracket and will not be matched with lower-level players.

The daily and weekly mission objectives in Ilum now require defeating enemy players and/or collecting armaments from the center objective.

Players now gain increased bonus Valor for kills based on the number of objectives controlled by their faction.

Increased bonus Valor is now granted for player kills when defending an objective your faction owns.

A notification is now displayed when a player gains Valor.

Three new respawn points have been added for each faction.

Companions are now restricted from the PvP objective area on Ilum.

Notifications are now displayed when enemy players are close to an objective.

Players who have left a Warzone can no longer receive an MVP vote from teammates.

Your PvP status will now be toggled automatically upon leaving a PvP region.

Additional feedback is now provided when a player attempts to toggle their PvP flag.

Corrected a rare issue that could cause the Frogdogs to be declared the winner in a 0-0 match even if the Rotworms held the ball last.

Mountable turrets in Ilum no longer deal damage to targets behind them or outside their range.

Turrets no longer immediately dismount the player after use.

Fixed a bug that prevented the minimap title from displaying when loading into the game or refreshing the UI.

Corrected an issue that caused some mapnotes to disappear from the minimap when other mapnotes were updated.

Attempting to place a non-mission item into the mission inventory now displays an error message.

Dragging equipment onto the character paper doll no longer prompts an item deletion notice. Items dragged to the paper doll are now equipped if possible.

Item set bonuses now appear on the tooltip when viewing an item on a vendor.

Items that can be modified now display with the correct loot color in the loot roll window.

Fixed the tooltip display for ability cooldowns over one hour in length.

The interface for splitting stacks of items now displays correctly.

Players nearby a player who achieves a new Legacy level no longer receive the Legacy level-up notification.

The owner of a holocall conversation is no longer shown in the last frame of the cinematic.

Additional issues that could impact performance on Taris have been addressed.

Vanity pets can no longer be considered targets for any abilities.

Corrected an issue that could cause some preferences to reset to defaults upon area transitions.

An Aim Datacron on Ilum is now accessible and no longer repeats its initial cinematic once used.

A Datacron on Coruscant is no longer blocked by unintentional collision.