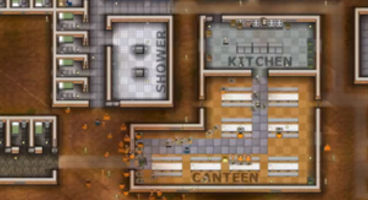 Chris Delay of the UK's Introversion studio has said Prison Architect will be taking on some series issues that plague society within those high prison walls, like race and assault.

However there are no 'drop the soap' moments, as they "don’t have that occurring anywhere" in the game - but they could. Delay admits that "might be too much," but he hasn't decided yet.

The indie dev doesn't want Prison Architect as some silly, 'away at summer camp' type sim where inmates are generally harmless. That's not prison life, and Delay wants us challenged.

"We didn’t want to pick a tough topic like prisons and just make something completely cursory and surface level stupid,” Delay told Eurogamer. So far the only thing released for the new Prison Architect from Introversion has been a first look trailer, which showed us a very clean 2D prison world we'd be running.

"We wanted to do it properly. It is a game and there are concessions to it being a game. We’re not out to make an experience that’s utterly horrific to play. We’re not aiming to make the player deeply uncomfortable.” The trade of contraband in the slammer is rife and that's certainly something we'll be dealing with.

Sexual assault is another constant threat to the inmate population, but Delay may forgo it. “I will tell you we don’t have that occurring anywhere in the game currently,” he stated, then added: “It might be a step too far. It might be too much. But that said, I don’t know. I haven’t made the final decision on that.”

Delay firmly believes videogames can tackle series issues like rape and race, and the latter will play a major part in Prison Architect's day-to-day humdrum. "Race is going to be a causal factor in a lot of other things. The most obvious one is gang alignment. A lot of gangs are founded on racial terms. It’s one particular race in one particular gang."

"It’ll be interesting to see what the response is to that. We’re treading so far into a zone that’s difficult to deal with without offending people," noted the indie boss. Our industry shouldn't flee the sight of serious topics but they must be handled tactfully, and not just crudely lumped in to stir up interest or a cheap thrill.

"There’s no reason why games can’t deal with much more serious topics,” Delay said. “It’s much harder. I’m very conscious of the fact you can’t just trivially deal with issues like rape or race. You have to consider what it is you want to put in. It just makes it a lot harder.”

"They’re very difficult questions that will probably only be resolved by extremely talented writers getting involved and figuring out how to meld that craft with video games.”

Prison Architect releases on PC later this year. Introversion are the creators of Defcon, Uplink and Darwinia.