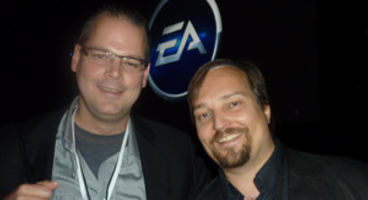 According to German website GamersGlobal, BioWare co-founder Greg Zeschuk may have exited the company he started alongside Ray Muzyka back in 1995. He quit as GM back in May this year.

The German sites' source claims Greg Zeschuk "has not been sighted" at the studio for weeks, and neither he nor his co-founding partner Ray Muzyka were present at a recent company meeting.

When Zeschuk announced the reorganisation of BioWare Austin back in May this year, "he outlined his plan to return to his family in Edmonton for a much deserved vacation," EA told GamersGlobal.

The publisher continued: "Greg is still with EA. He's now back in Canada, taking time off and thinking about new projects. No change with Ray Muzyka." The BioWare studio began life back in 1995 where they went on to create RPG gems Baldur's Gate and later Star Wars: Knights of the Old Republic and Jade Empire.

Most recently the co-founders have been attached as co-executive producers on Dragon Age and Mass Effect. BioWare Austin led the development of last year's Star Wars: The Old Republic MMO which has more or less adopted free-to-play as subscription levels dip below one million.

BioWare also run BioWare Victory, which is the studio said to be leading all of EA's real-time strategy efforts and are currently working on Command & Conquer: Generals 2, powered by DICE's Frostbite 2 engine.