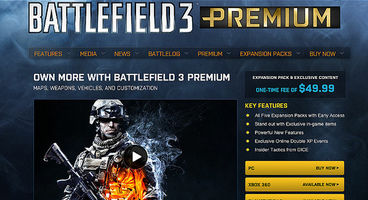 A fresh controversy has arisen in Australia regarding the price of Battlefield Premium for Battlefield 3, which has forced Electronic Arts to give PlayStation 3 users a partial refund, while Xbox 360 owners are still complaining of price gouging.

EA advertised Battlefield Premium at $49.99 AU, but neglected to mention that that price was for the PC version of the game. The PlayStation 3 gamers were charged $79.95 AU, while Xbox 360 gamers were charged 4000 Microsoft Points ($66 AU), and on top of that, require an Xbox Live Gold subscription.

PS3 owners made their displeasure known, and EA was forced to drop the price of the PSN version to $64.95, and awarded gamers who'd already purchased Premium a $14.95 refund to their PlayStation Wallet.

Some gamers are upset that Battlefield Premium is still being advertised as $49.99 AU even though it only represents the PC version. EA has not responded to that criticism as of yet.

Battlefield Premium is essentially Electronic Arts' version of Call of Duty: Elite, and includes prepaying for all Five Expansion Packs (at a 33% discount), with early access to the content, exclusive in-game items, exclusive online Double XP Events and Insider Tactics from DICE.