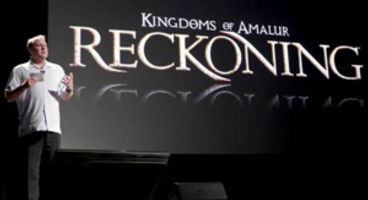 Retired pitcher Curt Schilling reveals that his 'disappointment' in Sony's EverQuest II fueled him to form 38 Studios, and subsequently develop and release Kingdoms of Amalur: Reckoning.

"What were they thinking?" wondered the former Red Sox player. The studio is funded mostly by Schilling, with help from "high net-worth individuals". The Apple II hooked him on gaming.

Video games are what fascinated Curt Schilling, ever since his best friend's father and youth baseball coach brought home an Apple II. He fired up 'Wizardry'.

"I wasn't really a big car or jewelry guy," Schilling said. "I always had the best laptop you can have." In the late 1990's he was playing with the idea of his own production company. The disappointment he got from Sony Online Entertainment's EverQuest II was the final straw and got the ball rolling. "What were they thinking?"

He told Sony devs he'd start his own development company, with many joking that they'd sign up. Schilling later offered them actual jobs to which many thought he was kidding. 38 Studios founded in October 2006 with just 11 employees, and has now ballooned to around 400. Schilling was fortunate enough to rely on his own private wealth.

Schilling now realizes how hard it is to make a game for different platforms. "The only thing I've seen that could be harder is missile defense systems," said the former pro-baseballer. Right now 38 Studios is also developing an MMO which is based on the Kingdoms of Amalur IP. It's codenamed Copernicus.