38 Studio founder Curt Schilling and his legal team have moved to have the court dismiss the lawsuit by The Rhode Island Economic Development Corp. that claimed Schilling's studio defrauded the state, accusing it of "racketeering and conspiracy".

Schilling: Project Copernicus MMO would have been free-to-play

According to 38 Studios founder Curt Schilling, the Kingdoms of Amalur MMO, which was codenamed Project Copernicus, would have been free-to-play had it finished development.

38 Studios owner Curt Schilling revealed in an interview with Boston Magazine that the MMO the now-defunct developer was working on had more-or-less died on the vine, and that Take 2 Interactive was about to sign a deal to publish Kingdoms of Amalur 2 when Rhode Island gov Lincoln Chaffee dropped the bombshell that destroyed the company. 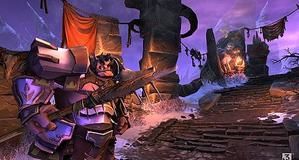