Rise of the Hutt Cartel first expansion for Star Wars: The Old Republic 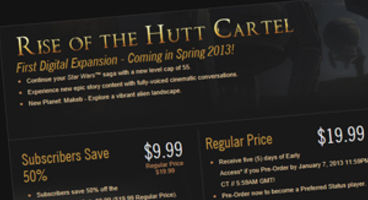 Coming in "spring 2013" is the first digital expansion to BioWare's Star Wars: The Old Republic MMO. It will let our heroes continue their sagas to a new level cap of 55, along with "new epic" story content.

The expansion will include "fully-voiced cinematic conversations" as fans would expect. An all-new planet will appear on our jump drive computers; Makeb, which features a "vibrant alien landscape."