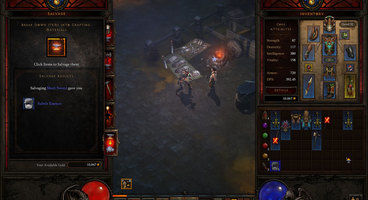 Diablo III creative director Jay Wilson announced on the official Diablo III site that the development team has been making numerous changes to the action-RPG. The post was a way to show the publisher's policy of polishing their games to a fine sheen before releasing them. According to Wilson, "Our job isn't just to put out a game, it's to release the next Diablo game. No one will remember if the game is late, only if it's great. We trust in our ability to put out a great game, but we're not quite there yet."

Some of the changes come from the feature becoming superfluous. For example, Scrolls of Identification are being cut from the game, and, instead, heroes will simply right-click on unidentified magic items which will take a short casting time to accomplish. ("Your character in Diablo III is just that badass now," bragged Wilson.) Another example is the Mystic artisan, whose ability basically mimics the normal socket and gem system. Rather than waste valuable man-hours figuring out a way to differentiate the Mystic, she's being dropped for the time being, and will be added at some point post-release with a more enhanced ability.

Another interesting removal are the Cauldron of Jordan and Nephalem Cube items, which allow players to salvage and sell items without returning to town. However, with the inclusion of the Stone of Recall (basically Diablo III's version of the World of Warcraft Hearthstone), both items became superfluous. The items were included at a time when Blizzard stated there would be no Town Portal scrolls. Now that the player can return to town to sell items, salvage, craft, and interact with the townsfolk, the Cauldron of Jordan and Nephalem Cube have no reason to exist. The Blacksmith artisan will now salvage items, and common (white) items will no longer be salvageable.

Some changes are made to improve the UI and gameplay, such as removing the fifth quick slot button and replacing it with a dedicated potion button, which is intended for players to use in an emergency. Wilson related, "Our combat model doesn’t promote or even allow chugging potions in rapid succession, but they’re certainly useful when you run into a string of bad luck with health globes, or if you just get in over your head."

Another change to the UI is due to the removal of the Cauldron of Jordan, Nephalem Cube, and by moving Town Portal to the skill panel. Character stats will directly be on the inventory UI. "Now you can see your stats go up and down as you try on different items. All the same info is available; we’re just streamlining the UI, making it more useful. It might seem insignificant but we're pleased with the results," informed Wilson.

According to Wilson, the development team dropped Defense, Attack, and Precision as attributes. Armor is taking over for what Defense used to provide, Physical Resist will take over for Armor, and Chance to Crit will fill in for Precision. Wilson explained, "Obviously these stat changes are one of the bigger systems changes we're currently working on as they have far reaching requirements to re-itemize and balance the game."

"We want Diablo III to be the best game it can be when it launches. To get there, we're going to be iterating on designs we've had in place for a long time, making changes to systems you've spent a lot of time theorycrafting, and removing features you may have come to associate with the core of the experience. Our hope is that by embracing our iterative design process in which we question ourselves and our decisions, Diablo III won't just live up to our expectations, but will continue to do so a decade after it's released," Wilson concluded.

Diablo III is due to be released this year 2012 on PC.