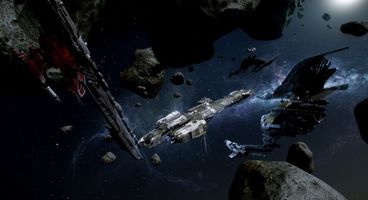 Star Citizen now owns the record for the game with the highest crowd funding backing; the Ouya console earned over $9M in funding.

However, Star Citizen "only" earned $2.1M of the $6.2M via Kickstarter. Most of the funding - $4.1M of it - came from direct contributions on the game's official site.

Roberts, naturally, was more than pleased with the support. “I am absolutely elated by the incredible outpouring of support for this project,” he beamed. “It's clear that space sim fans have just been waiting for a game like ours to come along and rekindle some of the excitement that's been missing from PC games and the space sim genre. With the resources that our fans have provided, it means the team will be able to provide more features in Star Citizen and deliver an even better game.”

He added, “I've been looking for an opportunity to jump back into gaming. With all the tools and tech currently available, I can now make a game that really provides gamers with cutting-edge visuals, a highly detailed, immersive world and visceral, heart-pounding combat that only the PC can provide. In fact, PC gamers don't need to take a back seat to any other platform. With Star Citizen, I want them to be able to stand up, be counted and completely enjoy all that their PC can deliver.”

Star Citizen will be going into alpha testing in Winter 2013, with a probable 2014 launch.