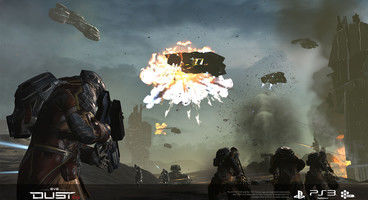 In Strategy Informer's interview with CCP CFO David Reid, he discussed that DUST 514 will be more of an MMO experience than a more traditional shooter like Call of Duty.

"The way we launching DUST is a lot more like launching an MMO than launching a AAA FPS," Reid explained to SI's Joe Robinson,"I mean the game is both, but rather than try to take the same path that Halo 4, Black Ops II, Borderlands 2 and those guys are going to do, they have a very different business model."

Reid then stated that CCP was launching DUST 514 in the same way one would launch an MMO, starting with a core group of players who represent the core group of the MMO.

"That’s why EVE Online continues to grow unlike anything else on the market is that some of the guys who were there in 2003 are still around," Reid says, "And every year more players come in and the social infrastructure that started it all is still in place, nobody comes into EVE with no one to talk to, there’s always someone around who’s been there a long time to help them out."

Of course, DUST 514 is a first person shooter, not a space sim MMO like EVE Online, so CCP has to make some concessions to the genre.

"The shooter audience is very different, so part of our thinking is that the goal in the immediate term is to try and bring in a very veteran FPS player, so not someone who’s just played COD or Battlefield, but someone who has played M.A.G., who is familiar with the core shooter experience regardless of EVE, and is used to these battlefield-like experiences with all these vehicles etc," Reid noted, but added that with the integration into EVE Online, some sacrifices would be made, saying, "With the integrity of our economy. I mean there are no magic spawnpoints where a tank appeared – that tank was paid for with ISK by someone who earned that money fighting elsewhere."

Having another game dictate the weapon and vehicle availability and loadouts will be quite new for some players, Reid acknowledged, and it won't necessarily be something the average Call of Duty player would want. "That’s a very different kind of player to someone who’s just playing Call of Duty this holiday, because they played Call of Duty last holiday because all their friends play it and it’s the only thing they’ve ever played," Reid admitted.

However, it's not a major concern right away for CCP, as they're counting on the core EVE Online fanbase to get on board first, to form the aforementioned "core base".

"Ultimately we believe those kinds of people are our target customer, but we don’t believe we need to go after them right away, especially during Q4,"

Reid stated, "I mean when we think of PlayStation 3 we think of M.A.G., SOCOM, Killzone… all these people and clans who are accustomed to the core shooter experience. Once we move out from that, that’s when we start targeting the Halo and the Call of Duty or Borderlands guys, but they will have a different level experience as that first circle will have."