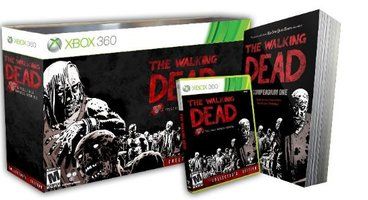 Telltale Games has officially announced the retail release of The Walking Dead, which will include all five episodes from the first season of the series, as well as the Collector's Edition. Both will be released on the 4th December 2012 for Xbox 360 and PlayStation 3.

The special edition was earlier leaked by retailer flyers.

The Collector's Edition comes with an exclusive special edition The Walking Dead Compendium One. It features exclusive Charlie Adlard cover art, and is over 1,000 pages. The book, which normally costs $59.99, will include the first 48 issues of Robert Kirkman's comic book as well. (The standard edition won't feature Adlard's artwork.)

The fifth episode, No Time Left, will be released sometime before the 4th December on PC, Xbox Live Arcade and PlayStation Network.