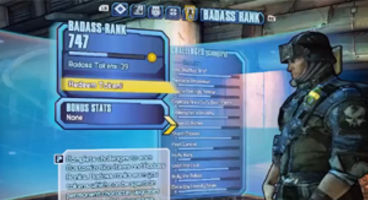 Borderlands 2 wants you to become the ultimate Badass on Pandora and to that end players earn Badass ranks, which lead to earning tokens that can be redeemed for permanent stat boosts.

Those boosts apply to all characters you create, and so are therefore awesome. Sadly a rather vicious bug has been discovered which resets the Badass rank. Gearbox detectives are on it.

While the rank itself and any tokens earned are plummeted back to zero, the unlocked challenges remain unlocked meaning they can't be re-earned by that character.

The good news is that because those Badass challenges don't also reset the development team should be able to recover the lost data for all those affected, as after all it's on record what each character has tallied up. "Our engineers are looking into this, and the information you've provided has proven to be a great resource while we investigate," said Gearbox. "At the moment, it seems to be a fairly rare issue and we'll keep you updated on when we resolve it."

The reset bug reportedly affects Xbox 360, PS3 and PC versions and so is a fundamental flaw. One Borderlands 2 gamer has captured the totally uncool Badass rank screw-up in action via a YouTube clip.