After Borderlands 2 received a substantial number of poor reviews following the Borderlands 3 exclusivity announcement, Valve has finally stepped in and fixed review bombing, potentially for good.

Borderlands is Back - as a VR Game

Gearbox is getting ready to re-release the fan-favourite looter-shooter, Borderlands 2, in VR.

Original Borderlands to be remastered, reveals Australian ratings board

2K Games and Gearbox Software are remastering the original insanity that was Borderlands. According to the Australian ratings board, it will be called Borderlands Remastered Edition.

It is expected to arrive for PC, Xbox One and PS4. It was a collaborative effort between Gearbox and 2K Australia. This re-release was rated MA15+ yesterday, December 11th. 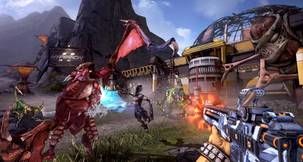