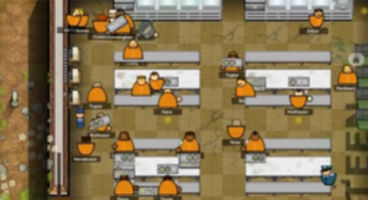 Mark Morris from indie studio Introversion - creator of Darwinia - is now at their 'alpha 2' stage with Prison Architect. They were "completely blown away" by the huge success of their own crowd-funding.

This leads Morris to declare a "real golden age" for indie projects as people are willing to back small outfits. Kickstarter wouldn't have fit and too much pledged cash"would completely change things".

"One of our fears with Kickstarter was that it might not take off at all," admitted Mark Morris. The flip side is if it did too well Introversion would be 'forced' to change the game.

"It would completely change things – the way you set up and run your project – all sorts of things. That’s interesting, and things can go wrong. When you’ve got too much money, you can try and over-reach things. It’s an interesting space."

With the latest alpha build now released for those who donated funds to the studio, early adopters can now enjoy full blown riots among convicts as they get real mad when needs aren't met. This also includes the feature of guards being defined set patrol routes to discourage mischief.

They didn't purposefully set out to make it look cartoony to offset the seriousness of its tone. "We didn’t want to make it abstract, we knew that from the start," said Morris. "We found Ryan Sumo’s art was perfect for the right, very clean and obvious top-down look, so you can see at a glance what’s going on."

"That kind of – by definition – is quite cartoony, but it wasn’t a specific decision to juxtaposition that against the serious issues within the game. it just kind of happened that way. But fairly early on we realised we wanted the tone of the game to be a bit darker and more serious."

The convicts follow "the same AI model that they’ve used in The Sims – based on Maslow’s Hierarchy of Needs – which is a psychological model." That means the first absolute need is the need to go to the toilet. "That overrides every other need, and then the next level – the second stage up – is the need to eat and drink. You have all these basic needs."

"But then as you go up, you start hitting a need to socialise, or a need to feel respected – those kind of things. Within Prison Architect, the structure is in place to code all of these things, but they’ve not been written yet," he continued.

"Ultimately, the goal is that – for instance – prisoners will have a need to spend time with their family, and if you put pay phones in, or a visitation centre, that need will be met and discharged." Neglecting these needs will eventually lead your prison population to get angry and that will descend into violence like shanking, or a full blown riot.

They don't want to force us into just working to fulfil every desire though as we can also take the 'iron fist' route to maintain order. "However, the option to rule with an iron fist will definitely be in there as well, so if you wanted to take a more disciplinarian approach to your prison you will be able to." Right now there's not enough coded for that.

Introversion isn't interested in pursuing an Xbox Live or PlayStation Network release because of all the hoop jumping and exclusivity demands thrust upon studios. It's especially tough for the likes of Introversion and they remember their hard time with Darwinia+. Also they don't want to pay huge dev kit costs.

"Yeah, I think the world has hugely moved on," said Morris. "The original idea behind game consoles were that the experienced player was going to be of a much higher quality than PC gaming was." Those were the "old days" when PC gaming was a real pain to get working just right. Now errors and crashes have been hugely reduced as the platform has matured. "You don’t need to have a huge amount of technical knowledge to play games."

"If you look at our position: we’re two guys basically – although we’re a little big bigger than that – working on a game we’ve launched ourselves. We’re in alpha, we’re seeing money now, which is enabling us to carry on developing it."

"Hopefully we’ll get a Steam deal – I’m pretty confident we will as we have a great relationship with Valve – and then we’re exposed to Valve’s market of 20 million people. Alternatively we could spin out a team of probably ten people, we need to pay Microsoft £10,000 a go for a development kit."

"...and it’s non-refundable once you’ve bought it. You’ve got to pay – I think our quality assurance bill was $30,000 for testing with Darwinia+, and it took four years to get the game certified to a standard that Microsoft wanted. It then sold rubbish. We hardly shipped any units on Xbox 360, compared to PC." Lesson learned.

He adds: "There is a strong indie community now on PC that doesn’t exist within the console world, and they’ve tried various ways to tap into that with Live Arcade and Xbox Indie Games, and they just never managed it in the way Steam has." They might outsource Prison Architect to another dev for port purposes.

"You’re not delivering the amount of sales, you’re making us work harder, and ultimately we’re getting paid less than what we do on PC. So I think they’re definitely – in the indie world – second class customers. If they want to work with us – and if they want indie games on their systems – they’re going to have to change quite a lot to make it attractive."

Check out the full interview between Mark Morris and VG247. Visit the official Introversion website for Prison Architect for the tiered options to buy the alpha version to play right now.