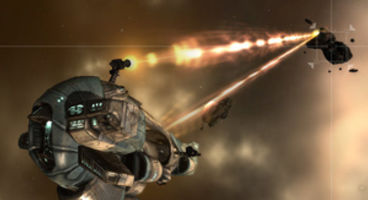 Lead producer Kristoffer Touborg at CCP for EVE Online claims it's rather boring moments are actually some of its most appealing, like when players are "hauling minerals" about.

It's a "viciously boring" task but people spend "eight hours a day doing something" in the real world, come home, and then "they go haul minerals in EVE." Mundane can be an eye opener.

It's the safety and guaranteed reward that comes from the 'boring and menial' that make them so attractive, as not everyone enjoys the 'twitch' nature of action gaming.

"...hauling minerals across EVE: it’s viciously boring, but people still spend eight hours a day doing something and then they go haul minerals in EVE," Touborg gave as an example of EVE Online's 'captivating boredom'.

"I met a truck driver who did this. He drove a truck in real life, and when he got home he drove a space truck. There’s so many real things that we think of as mundane, but they become great game features.” It's the rather mundane things in life that can take on a whole new dimension in things like EVE Online, he said.

"They’d have shared inventory and shared bank accounts and all that stuff. There’s all these dynamics that come out of sharing," Touborg added, talking of marriage.

"Something as mundane as having shared credit cards, in EVE, becomes a feature. It doesn’t have to be like the biggest dragon you could ever find. Just take something from real life that might be slightly boring and put it in a different environment, and just watch what happens.” The lead producer declared that "people like boring" for safety.

“I think that not every game was meant to be Counter-Strike. Not everything has to be twitch action-based, super-intense, in-the-zone, adrenaline rush 24/7,” he explained.

"Everybody complains about mining, but I think it’s the finest hangover feature you could ever do. I’d just switch the miner on, I’d watch sports on Sunday and be hungover and eat pizza. I think that’s great. Not everything has to be super wild.” CCP's DUST 514 however offers a decidedly different experience to EVE Online's more 'boring' nature.

Do you enjoy a good mundane game after a rather boring day? It's why most tycoon games exist isn't it?