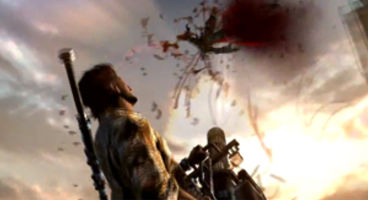 Losing Devil's Third from the THQ line-up wasn't a happy moment for Danny Bilson as he'd been "deeply involved" in the project. It came down to only having so much money to allocate.

Bilson affirms it's "not about stopping a game that had problems," but simply having a "limited amount of slots we can fund". THQ are "looking for help to finish the game" from Valhalla.

Sales forecasts weren't putting them off either, says Core Games VP Danny Bilson. It came down to a difficult decision because their window for release was squeezed.

"Yeah. I'm personally disappointed. It's a project I've been deeply involved in. It's a high quality project, but for us, we got to a point structurally and financially where we only had so much money to invest. I love Itagaki-san, I love Valhalla, I love that game, and we're hoping to find a partner on the financial side to help us finish it," Bilson told Eurogamer.

"It's purely a function of where we are strategically in reorganising the company to move forward. It's not about stopping a game that had problems, or a problem project. It's not. We just have a limited amount of slots we can fund, and for various reasons - business reasons predominantly, and not about sales forecasts or anything like that - it's really about what we can fund and what we can build in this window."

"It became a very, very difficult and painful decision to look for alternatives with Devil's Third."

The publisher would like to keep it but accept it might go elsewhere. Still they're looking for someone else to help chip in the cost of production. Ideally they want it to stay on with a THQ sticker on it.

"We don't know if we're going to publish it or somebody else is, but we are looking for help to finish the game. They're fabulous developers, absolutely one of my favourites to work with over the last two years, and this has been very difficult and personally painful for me and Itagaki-san to have to go through this period," he continued.

"I hope we come out of the other side of this period with Devil's Third for people to play, even if someone else publishes. I want that game to be played because I think it's fantastic."

Devil's Third is in development for Xbox 360, PS3 and PC from new development outfit Valhalla Game Studios, headed by Tomonobu Itagaki, know for creating the Ninja Gaiden and Dead or Alive series. Devil's Third is a third-person shooter, which is a large departure from Itagaki-san's previous game projects.