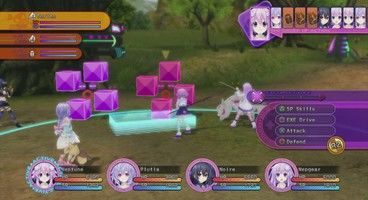 NIS America has announced that Hyperdimension Neptunia Victory, the third game in the series, will be landing on the 21st March in North America, the 15th March in mainland Europe, and the 22nd March in the UK.

The publisher promises that Victory will feature more dynamic combat, giving players the ability to freely move units in battle, set up their own combos, fill up the EXE Drive gauge, and then deal "massive damage" with their finishing attacks. Other features include a new scouting system to gather info on dungeons, a flag system which triggers in dungeons to activate different events when your Scouts return from exploring, and the ability to obtain blank discs and burn different types of data onto them to access new abilities.

Gamers can check out Hyperdimension Neptunia Victory on the game's official site here.