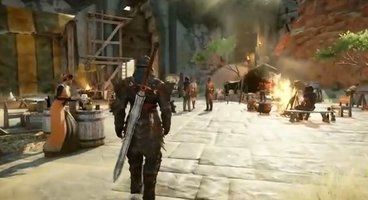 BioWare revealed some of the gameplay in Dragon Age: Inquisition at PAX Prime 2013, and players will be able to pause during combat to issue tactical commands, similar to what was done in Dragon Age: Origins.

Players will be able to pause combat and even change the perspective to a top-down view. According to the developer, they will be once again able to micromanage their party's combat encounter, which had been ditched from the more action-intensive Dragon Age II.

However, the game will be taking a page from Mass Effect 3 with combining action with combat situations that require some level of problem solving, such as dealing with enemies armed with large shields. Players will also have the option of using environmental destruction, such as causing a bridge to collapse with enemies on it, having them tumble to their doom.

According to producer Cameron Lee, "You take what the players wanted, which could have just been, well, just give me Origins, right? And we could have just done that, but we wanted players to feel like they were controlling the battlefield and battle space through things like some of the destruction, smarter AI, which we've been able to write, and some abilities the characters have for barriers and area of denial and traps.

"So it was a good merge of where we wanted to go and what the players wanted. And I think it's stronger. It's a really interesting creative process within the team to get the feedback from the fans, and that inspires. It gets people thinking. You end up somewhere you may not have realised you wanted to go and it ends up stronger."