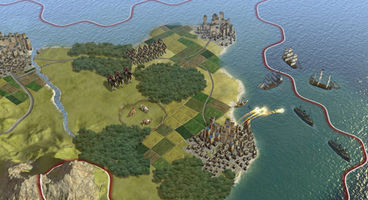 Today an update for Civilization V will be adding three new multiplayer modes, with two addressing how player turns are handled and the last - Pitboss - letting players connect, take turns and then disconnect to return later.

The Firaxis team has also added 'Observer' mode to watch multiplayer games unfold. There are a number of UI tweaks and some adjustments to military AI behaviours.

The Steam Workshop should be handled correctly now as they addressed a bug or two. Terrain art and some audio fixes were included in the latest update.

• New Mode - Hybrid - turns are simultaneous as they've worked in the past, but when wars are declared, any players involved in the wars switch to sequential until the war is resolved. All other uninvolved players still play simultaneous.

• New Mode - Pitboss - Your game can now run in a server mode, which allows players to connect, take their turn, disconnect, and come back later. Email notifications and steam notifications are built into the system. Once the system has received a healthy amount of feedback from the community, we will also include a stand-alone Pitboss server that does not require a steam account to run.

• Added an "Observer" mode to watch a multiplayer game.

• Added ability to save a game configuration from the Staging room, so players can keep various "favorite" game settings ready to go.

• Reworked lobby, added multiple improvements to the way games are setup, and added flexibility when loading a save, and all players are no longer available to play. Also added slot-type pull-downs so host can define the slot-type (like Open, Human Required, AI, and Closed).

• Game will now auto-start when all humans have readied up.

• Tracked down and squashed many more causes of out-of-syncs and connection issues, as well as other general bugs.

• Fixed an issue that caused workers building improvements to constantly "wake up" when hostile units were not close by.

• Fix an issue where the plot under a city would not be worked after trading/gifting it.

• Crabs should no longer spawn in lakes.

• Many additional subtle updates to tool-tips, and information exposed to players.

• New Forest and Jungle art for all terrain types.

• Touched up color on various terrain pieces, as well as some of the texture transitions.

• Fix Rock of Gibralter national wonder so that it's surrounding terrain displays properly (there may still be rare cases where this can still occur).

• Added missing "Selection" sound entries for some base game units.

• Military: Refine larger unit formations, and adjust the AI to use these against City-States if appropriate.

• Military: The AI will now prioritize capturing original capitals and cities that were originally theirs.

• UI will now change based on the DLL that is active (base game, Gods and Kings, or Brave New World).

• New Declare War Pop-up that includes an overview of all connected events (like trades that will be cancelled, City-State allies, etc.)

• New Single-Player leaderboards for main game, scenarios, DLC, and mods. To add leaderboards to a mod, add the "SupportsLeaderboards" property to its mod properties.

• Added a pop-up that tells the user that the game data is changing when DLC/Scenarios are activated/deactivated.

• Maintenance-free units are now properly tracked in the Economic Overview.

• Planes and Nukes are now considered Military Units in the Unit overview.

• Fixed issues with the city Garrison ring not displaying correctly.

• Natural Wonders that create Happiness will now display the yield properly in the plot tool-tip.

• Fix some issues that would cause the terrain yield icons to be incorrect, or sometimes missing.

• Religion: Fixed a bug where unknown civs would be revealed (via Icon) in the Religion Overview.

• Add in a player option called "Quick Selection Advance" which will have the auto-unit-selection advance to the next unit without waiting for the animation to complete.

• When the active player's turn starts, make sure all their city range strike icons are correct.

• Planes and Nukes are now considered military units in the overview.

• Fixed a bug in which units were not properly sorted by name in the military overview.

• Correct some issues that would cause unit icons to disappear.

• Fixed an issue that would cause some mods to download over and over from Steam Workshop.

• Changed the way the mod database is built so that the mod library is managed correctly.

• Fixed an issue with World Builder which could cause it not to launch properly on some users computers.