No Gods or Kings, only Pixels...

Gold Edition? Pfft. You want the Complete Edition, my friend. 2K Games and Firaxis has announced Civilization V: Complete Edition which rustles up every last scrap of DLC for $49.99.

The 2010 turn-based strategy has two expansions to its name as well as many little packs for new civilizations and scenarios. The Complete Edition will retail this Friday.

While the 'New World' may be getting it today, the rest of the planet has to wait until July 12th. Blatant ageism! World Congress brings greater prominence to city states, and enforces treaties.

Today an update for Civilization V will be adding three new multiplayer modes, with two addressing how player turns are handled and the last - Pitboss - letting players connect, take turns and then disconnect to return later.

The Firaxis team has also added 'Observer' mode to watch multiplayer games unfold. There are a number of UI tweaks and some adjustments to military AI behaviours. 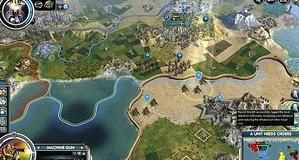