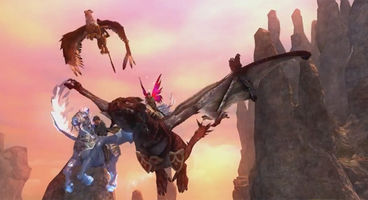 Sony Online Entertainment is introducing level 85 Heroic characters for those who want to jump into the high level content in EverQuest II. Logging in between now and October 15th gets you one free Heroic.

SOE also explain how to get hold of a Heroic level 85 char outside this Hero's Call promo, which includes a 'Try Before You Buy' trial. Free and Silver accounts no longer restricted on items.

To compensate for those evil item restrictions being lifted, Gold Members now get permanent 15% more from Coin Loot and a 10% buff to Mount Speed.

All this is in the ramp up to this month's Tears of Veeshan expansion for EverQuest II. For new and returning users, you can hop straight to the lofty heights of level 85 with Heroic characters from now until October 15th for free. If you don't take advantage of the promotion then the following is available to you:

Try Before You Buy: This option offers one full level of play from Level 85 to 86 – which takes a typical player several hours - with 100 Alternate Advancement (AA) points to test out a class of your choice at a high level. The Free Trial includes a flying mount, armor, consumables, and a few restrictions.

Upgrade Existing Character: The Upgrade option allows you to select any existing character at any level and upgrade it to a Heroic Character. All upgraded characters receive level 85 and are increased to 280 AAs, but not beyond. If you are above level 85 and have more than 280 AAs, you won't receive additional levels or points, but will get a bundle of items that includes the flying mount, armor, and consumables.

The standard Age of Discovery expansion, which released back in 2011, is no longer available to purchase, announces senior producer Holly Longdale. She also touched on the membership changes for EverQuest II.

"We are thrilled to announce that we are removing the item restrictions from both Free and Silver accounts. We felt that the restrictions weren’t in keeping with a positive experience so we removed it!" she said. "Gold Members are going to get permanent increases to Coin Loot (15% increase) and Mount Speed (10% increase) added to their membership benefits."