03 May 2013 | By Jonah A. Falcon
UbiSoft's Rayman series has been uniquely French and just plain bizarre, and Rayman Legends is no different, as evidenced by this musical map.

According to Ubisoft, "In this new musical map, Run, Jump and Punch in rhythm! The desert seems to be quiet but watch out! The Mexican skeletons and new enemies are waiting for you!"

Rayman Legends is due to be released this September 2013 for Xbox 360, PlayStation 3 and Wii U. 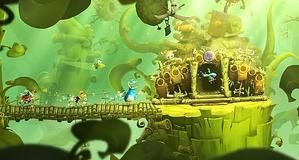