Gustavsson: DICE "should be slapped" for "worst set ups ever" in Battlefield 3 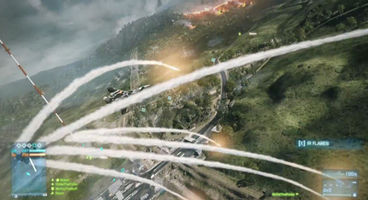 All those progressive unlocks in Battlefield 3? Creative director Lars Gustavsson reckons the DICE studio "should be slapped" for coming up with "probably the worst set ups ever" in planning them out.

He pointed out the ridiculous nature of beginner pilots having to earn counter-measures by 'acting as an ace pilot' the moment they step into the cockpit, as a prime example.

He promises "a lot of learning" has gone into Battlefield 4's unlock progression, following the 'slappable disaster' of its predecessor. Don't run before you can walk - basically.

“We shipped Battlefield 3, which we should be slapped for, with probably the worst set ups ever,” he told VG247.

“As a pilot, you had to fly your plane and only kill other planes with your cannons. You didn’t have any counter-measures; you didn’t have any missiles. And that’s basically for the best of the best pilots; that’s what they should do to show their skills," he said. "...you should have counter-measures, you should have heat-seeking missiles to give you a smooth ride into the game and then from there on you should customise."

"So that’s what we’ve tried to do; the full set-ups are supposed to be quite easy to learn and to master, and from there you can start unlocking things and seeing what your preferred setup is. So, a lot of learning from Battlefield 3 has gone into making the game.” Unlockables are a double-edged mechanic, both welcomed and despised.

Gustavsson promises that Battlefield 4 still has that same complexity that fans have come to love - if you want that.

"The key thing I’m after here is that even though we have score play and we now have Commander, it doesn’t mean that you have to play it that way. We have many modes where we don’t even have scores, or the focus on teamplay in that way. It’s you and only you, and only your kill-death ratio matters," explained Gustavsson.

“It’s totally up to you, but if you want to, even in the more complex mode, you can do your own lone wolf career. But if you want to there is a traditional layer – for those who want it. That’s the big thing. It might sound like a marketing pitch: play your ways. It’s sincerely what we believe in, that we shouldn’t dictate how to play Battlefield.”