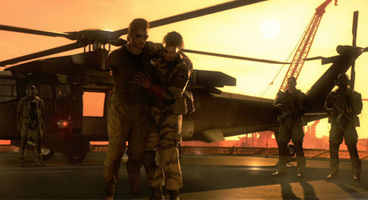 Hideo Kojima has revealed a little more about the time frame for Metal Gear Solid V: The Phantom Pain which he says will see a release when the PS4 has become "more spread out," offering no firm window.

Ground Zeroes is the spring 2014 due MGS V prologue, which doesn't feature an open world. It was to be a digital only title, but they opted for physical release.

Kojima-san didn't want to split the game, or at least not have them so far apart, but The Phantom Pain is of such an "enormous volume," that the prologue was moved up.

"It would've actually been better to release it all at once, but by the way things are going, it appears likely that Phantom Pain will be coming out around the time the PlayStation 4 becomes more spread out," Hideo Kojima told Famitsu, translated by Siliconera. "That means we would've had to make people wait a while longer.

The prologue is meant to lure us in: "If I were to put it in Hollywood movie terms, the prologue, that is Ground Zeroes, would be similar to the first 10-15 minutes that are meant to ‘captivate’," he explained.

"At first, something will happen, then the title will appear like ‘bam!’ and then nine years later, a big event will be the start" of Metal Gear Solid V. "That’s how the story will be connected.”

The Fox Engine tech demos they showed led fans to believe the game was near complete.

“Prior to the announcement of Metal Gear Solid V, last year, we showed a Fox Engine implementation video,” said Kojima-san. “Then, we also showed the Fox Engine in a presentation video at GDC 2013. Since we revealed information on a regular basis, there were many who believed that Metal Gear Solid V was already complete, and there were many voices from fans saying ‘we want to play it soon’.”

"However, The Phantom Pain has enormous volume, so it will require much more time,” he continued.

“So, together with the marketing staff, we consulted ‘what ifs’ and such, and came to the decision of allowing fans to at least play the prologue, ahead of time. We want to offer it for as cheap as possible, so at first we thought about making it as a download only; however, after thinking about people around the world, and how some places don’t have the best connectivity, we’re preparing a physical version.”