Ambient on Death Inc.'s strategy: "Streamlined is the wrong word" 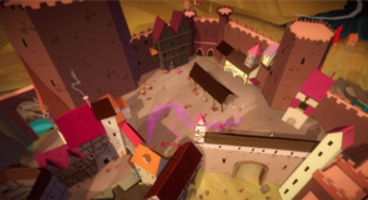 Ambient have just put their Death Inc. reaper strategy game on Kickstarter. In our talk with the studio we learn how to make the Black Death 'funny'. It involves a lot of great art and dark humour.

One issue is the actual commanding of our infected hordes to spread the plague. Ambient prefer the term "freehand" over 'streamlined', as they remove that "clicks per second" control barrier.

There's plenty for the more 'hardcore' of RTS fan but they wanted the player in the game "quicker and easier" than say StarCraft, but be able to use the "same strategy mentality".

"It has to happen as part of tackling a dark subject unless you really want to put a lot of people off," said Creative Director Daniel Leaver, referring to the thread of humour throughout Death Inc. "In the end, there are some games which are really dark and moody and gritty and they're great, but at the same time you can't feel like you could show it to your kids, for instance, and we want to feel like we can show this to everybody."

He continued: "Putting that kind of humorous spin on something as dark as the Black Death is a necessary thing to do. We haven't tempered our creative vision it's still a game about killing people in the 17th century with the Black Death and yet it's funny." The humour takes place at many levels, even from villagers falling over.

"I'd like to inject as much as we can and I think we're definitely going to get that with some of the things that happen through the sandbox nature of the levels and some of the cool things you can use, catapults flinging your infected over walls and stuff like that, so I think there'll be that side of things," added Design Lead Mike Green. "Going into the meta-game we're building, which is in the office, I think there's a lot of visual humour we can put in."

As for the strategic gameplay itself, Ambient Studios don't want players taxed with all that clicking and micro management. Instead they propose a more direct and fluid approach to giving our marching orders; paint.

"We prefer the term freehand now," said Leaver, as opposed to the too casual sounding 'streamlined strategy'. "We don't want people to think there isn't strategy in it. We want it to be seen as freehand in that you have the flexibility to make some really intricate decisions and complex strategies, but without that control barrier."

"I definitely find with games like StarCraft, especially when I'm playing multiplayer - and I'm shit at multiplayer - it often comes down to number of clicks per second," added Green. "There's so much going on but in my head I know exactly what I want to do. I think that's the nice thing with our mechanic, you just paint it. You don't have to worry about all the multiple things you have to do in between. So streamlined is the wrong word I think."

Death Inc. doesn't exclude those looking for some challenging strategy.

"We don't want to make it feel as though we're not catering to the hardcore strategy player by making a streamlined control mechanism. It certainly isn't a case of that. They will just be able to get into our game quicker and easier than they would another game and then they'll be able to use the same strategy mentality that they'd use to win in other games."

Ambient passes on micro management. It's "all very instantaneously satisfying and very visually clear what's going on, yet you've got a separate meta-game where you can calm down and cool off a little bit and manage the business side of things. I'm not a fan of micromanagement to the point where it gets in the way of you having fun with the game."

Check out our full interview with Ambient Studios' Daniel Leaver and Mike Green. Also don't forget to give the Death Inc. Kickstarter campaign a visit, and hopefully some of your backing budget. 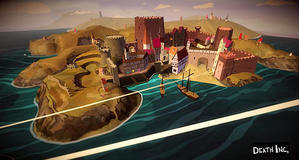