Five 505 Games to Feast Your Face On

04 October 2013 | By Joe Robinson
I remember when 505 used to work with a lot of strategy titles. Those were the days... now; they’re helping rep up-and-coming digital titles. Brothers: A Tale of Two Sons was something they were involved with, so it’s good to see they’re trying to help promote games that are different in some way. At a secret location somewhere in the heart of London (a pub), I was treated to a bunch of new titles they’re also helping to promote. Some of them were good; some of them were not so good. Here are Five new Five-Oh-Five Games For You:

Marlow Briggs and the Mask of Death

As I sat down to play this, one of the PR people said to me this was basically “God of War” on Speed. Class A banned substances aside, it is very God of War like, and pretty silly as well. Marlow Briggs has you playing a rather beef-cake African American, who gets murdered by an Asian mob-boss while visiting his girlfriend at a Mayan dig site. While his body is left out in the cold, an ancient Mayan warrior mask revives him and turns him into a scythe wielding superhero. Your only goal (apart from getting the goal) is to basically blow everything up. 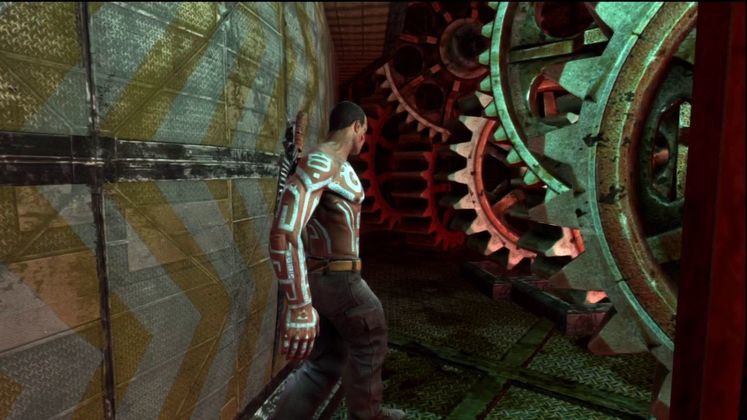 You have your standard quick and heavy attacks, combos you can learn, you can grab people and throw them at other people... you can even deflect rockets back to the point of origin. Every now and then, you can hop onto a turret and blow things up. It’s also remarkably QTE light, for what it is. Maybe it’s because I’ve only played the beginning hour or so, so far, but there seemed to be a lot of opportunities to shoe-horn in pointless QTE sequences, and thankfully the team have resisted. Sure, there was the odd bit, but the only thing they could be charged of doing up to this point is being overly fond of bullet-time/freeze-frame sequences. If you liked God of War then you’re going to love this, and even if you never played GoW then this is an action-packed game you can just zone-out to whilst you blow up stuff with your double scythe.

I have to admit, this is a neat little game. Bright, full of colours, and definitely aimed at a younger audience, Tiny Brains is none-the-less a challenging co-op puzzle game. You have four characters, each with a special ability – one that can create a frozen ice block, one that can teleport and switch places with an object, one that can push something really far, and one that can suck an object towards it. 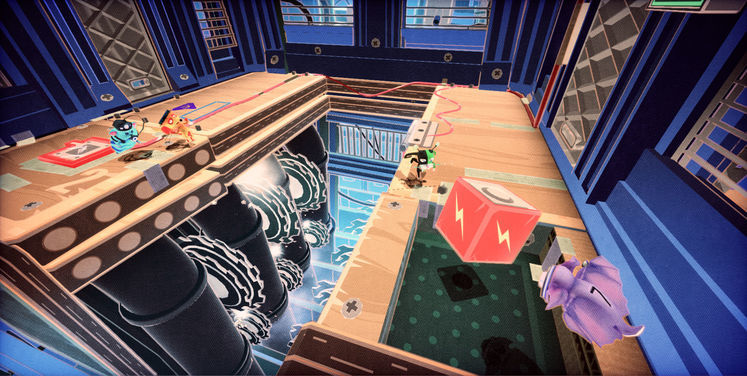 Tiny Brains involves a series of puzzles that you need to use all of the little dude’s abilities in combinations in order to succeed, wrapped in a light narrative that seems almost portal like, only for children. The game also comes with a set of challenges that really make you think, involving quick trigger fingers and reflexes and the ability to think outside the box. The only real downside to this game is that it’s not really designed to work well with less than four people. Sure, two or three people could probably control multiple dudes between them ok, but a person on their own would probably find the harder challenges extremely difficult on their own. Not recommended if you’re a billy no-mates, then.

This was an interesting title. Combining all the best bits of games like Sate of Decay, DayZ et al, this is a top-down survival/action game which dumps you on an island and expects you to survive anything and everything thrown at you. It has hunger, thirst, sleepiness and health as variables that you need to manage, and your enemies can be anything from zombies to well, more zombies. And not just people. I regret to inform you that I’ve died several times at the hands of zombified turkeys. That were on fire. 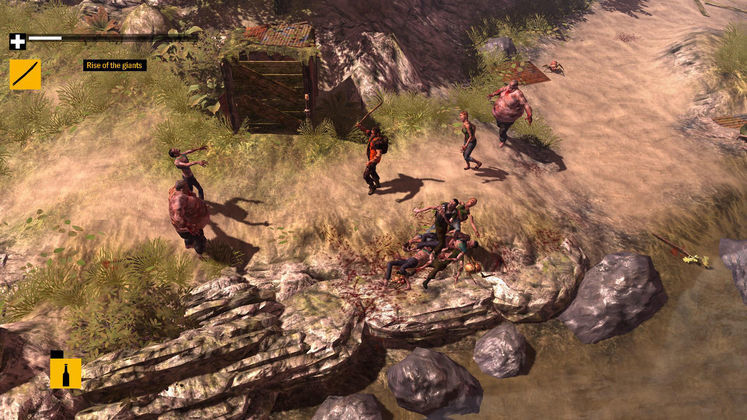 It’s a challenging game, although the modes I were trying out were specifically ‘challenge’ modes – not sure if there’s an actual single-player narrative to play through at the moment, as I was just presented with a series of different scenarios to try out. There’s an in-depth crafting system, and a lot of loot to go with it. There are also minor environment puzzles, but these extend as far as to figuring out that you need to light a stick on fire and burn down some bushes to proceed (at least, from what I’ve seen so far). Remember, fire is your friend, and it can protect you from whatever lies in the dark. Aside from Turkeys.

Arena-style first-person shooters have declined massively in the wake of Call of Duty and Battlefield. One could argue that Call of Duty is becoming more ‘Quake’-like in its treatment of multiplayer, but it’s lucky enough to be a game that proves to be an exception, as opposed to a rule. There may come a day where the old-school Quake or Unreal games make a come-back, but having played Rekoil, I don’t think it is this day. 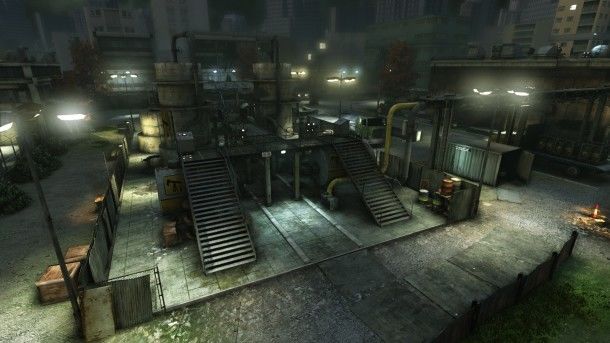 It’s not that Rekoil is bad – the environments are visually quite impressive, and the game functions as it should, but it’s not very inspiring at the moment. There was literally nothing to do but run around and shoot the other guys before they shot you. Fun for about twenty minutes, but given that what’s left of this audience is probably already invested in games like CounterStrike, Rekoil would have to work hard to provide gamers with an experience they’re not going to get elsewhere. I was only shown a small snippet of the game, granted, but then that’s all I can talk about. If you look up some info about the game, it seems well served to support its community in terms of tools, ESports etc... and it’s possible that some of the other games modes are more interesting.

We’d heard about this game before we arrived. Specifically, we’d heard about all the problems it’d been having. Takedown is a game that skirts a fine line between sadistic levels of difficulty, and genuinely being broken in some areas. A squad-based tactical FPS, in a similar vein to Rainbow Six or SWAT, it’s a ‘thinking man’s’ shooter. You and a group of three others play in objective-based missions, usually involving assaulting a building of some kind. You need to take out any hostiles present, and complete the objectives in the time limit. It can be done solo, although it’s more fun in multiplayer and there are also competitive multiplayer modes as well. 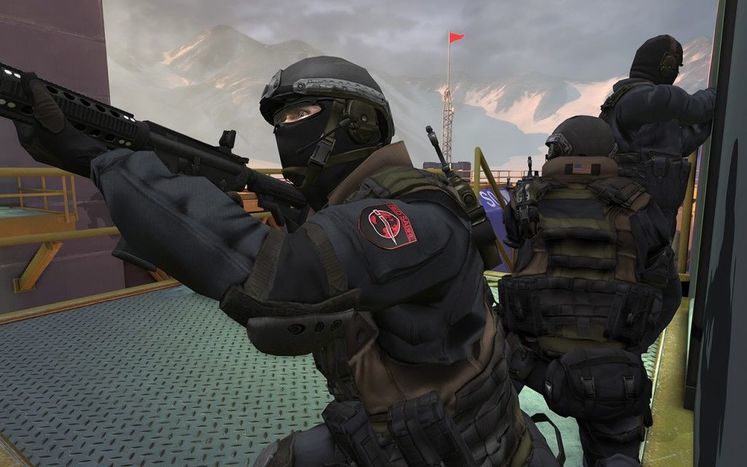 Problem is, it’s an extremely frustrating game to play. Shooting an enemy in the head, for example, doesn’t seem to faze them; however nipping them in the leg has them down for the count. The enemy AI is also deadly accurate, and because this game is meant to be ‘serious business’, one shot from them and your dead. This comes back to the fine-line I was talking about – one of the above mentioned points is frustrating, but just something you need to learn and master, another is frustrating and is a direct result of a poorly made game. I’d be a little pissed if I’d backed this game, that’s for sure.

There you have it then – a handful of new games to consider (or not) in the run up to the holiday season. Maybe you’ll discover something new, maybe you won’t, but the indie seen is growing and growing as the years go on, and as the PC gains more and more relevance, we should be seeing more and more interesting and out of the box titles to satiate our unrelenting need to be entertained.